Founder of the Labour Party

Keir Hardie worked as a coal-miner from a young age and represented miners in Lanarkshire and Ayrshire as union agent and secretary. Self-taught, he took up journalism and founded, edited and published the newspaper 'Labour Leader'. He moved to London in 1891 and served as an independent Labour MP for West Ham (South) from 1892 to 1894. In 1893 he played a key role in forming the Independent Labour Party and represented Merthyr Tydfil from 1898. He advocated an alliance between the trade unions and socialist organisations which led to the setting up in 1900 of the Labour Representation Committee forerunner of the Labour Party. Keir Hardie was elected as the first chairman of the Parliamentary Labour Party in 1906. He campaigned for women's suffrage and against the First World War until his death in 1915.

Learn more about Keir Hardie and Lochnorris, his family home in Ayrshire, in our feature Across the divide: A J Balfour and Keir Hardie in 1905.

James Kerr was born on 15 August 1856, the son of William Aitken, miner and Mary Kerr, farm servant, daughter of James Keir and Agnes Paterson. The entry in the statutory register for the district of Holytown in Lanarkshire records Agnes Kerr, grandmother, as the informant. The annotation in the left-hand margin refers to an action brought by Mary Kerr of Woodhall Row in Legbrannock against William Aitken, at or near Holytown, about paternity of the child. The Sheriff Court of Lanarkshire at Hamilton accepted that they were the parents on 14 October 1856 .The amendment to the register entry has been initialled by the district examiner Robert Gordon (RG). This entry is indexed under James Kerr and James Aitken.

Mary Kerr married David Hardie, ship carpenter from Stirlingshire, in 1859. In 1861 they were enumerated at 23 Albert Street in Govan with their son David aged one.

In 1871 James Hardie, 14, coal miner, was enumerated at Darngaber Rows with his mother and step-father. The census record for Hamilton includes information about their four children.

James Keir Hardie, 23, miners' secretary, married Lilias Wilson, 17, dressmaker, on 3 August 1880. The entry in the statutory register for Hamilton shows that the marriage took place after banns according to the forms of the United Presbyterian Church and of the Evangelical Union Church. His parents are William Aitken, coal miner and Mary Hardie, maiden surname (MS) Kerr.

In 1881 James Hardie, 24, secretary for the Miners' Union, was enumerated at Old Cumnock in Ayrshire. The census record shows he was a visitor in the household of Alexander Chapman an agent for the union.

By 1891 James Keir Hardie, 34, journalist, had moved to Old Cumnock with his wife, daughter and two sons. The census record gives their address as Barhill Road.

In 1901 James K Hardie, 44, newspaper proprietor, editor and MP, was at Holmhead with his family. The census record for Old Cumnock shows that he was an employer.

In 1911, James Keir Hardie, 54, Member of Parliament, was at Holmhead, Lochnorris in Old Cumnock with his wife and daughter Agnes. The household schedule shows that the couple had been married for 30 years, had four children and that three were living at the time of the census. The enumerator has added coal mining in the column for industry or service then crossed it out.

James Keir Hardie, 59, journalist and MP, died on 26 September 1915 at 8 South Park Terrace in Glasgow. The entry in the statutory register for the district of Hillhead in Glasgow gives his usual residence as Lochnorris, Old Cumnock and the cause of death as pneumonia. His father is recorded as David Hardie and the informant was his brother George Hardie.

Keir Hardie's will and inventory were registered at Ayr Sheriff Court. They show that he had appointed his wife and daughter, Agnes Paterson Hardie, as his executors. 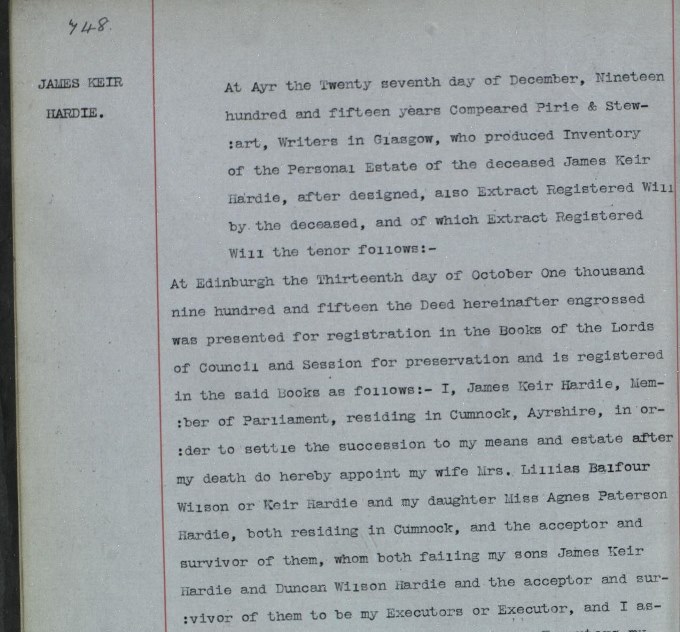 The inventory is divided into two parts covering Scotland and England. It itemises dues from the Old Cumnock Co-operative Society, Clydesdale Bank, Labour Pioneer Press Ltd at Merthyr Tydvil, London and South Western Bank Ltd and his MP's salary for the third quarter of 1915. 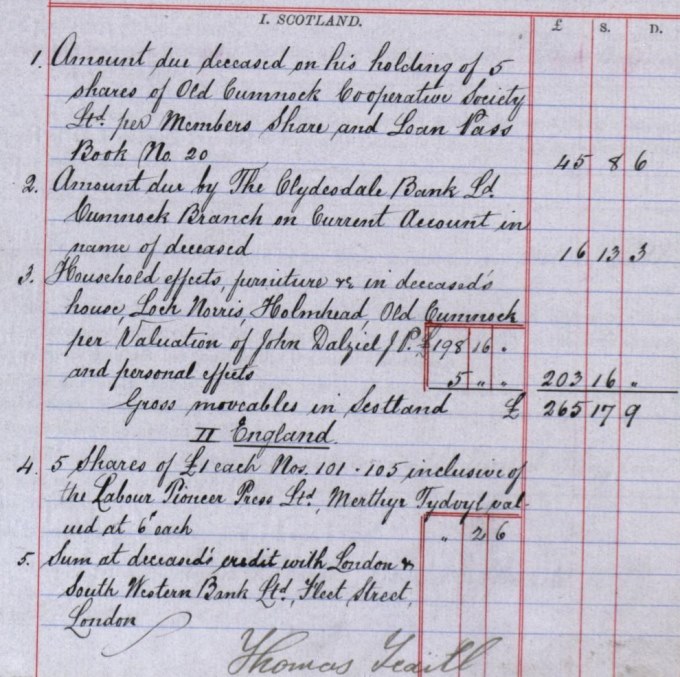