Inventor of the pedal cycle

Kirkpatrick McMillan became an assistant to the blacksmith at Drumlanrig. It was there that he first saw a hobby horse and decided to make one of his own. He returned home to help his father, a blacksmith in Dumfriesshire. Here he developed a machine which could be propelled by a form of pedals and by 1839 he was able to test it on rides to Dumfries and to Glasgow. It was the first pedal cycle but he didn't patent his invention and others went on to make copies for sale. Instead he took on his father's smithy and lived at the family home for the rest of his life. His surname is spelt in three different ways in the records below but from the 1851 census onwards is consistently given as McMillan.

Kirkpatrick Mcmillan was born on 2 September 1812, the son of Robert Mcmillan and Mary Auld in Byersflat. The entry in the Old Parish Register (OPR) for Keir gives the date of baptism as 18 September.

In 1841, Kirkpatrick Macmillan, artisan, was enumerated at Gayfield House, Shamrock Street. The census return for the parish of Barony shows that he was living with the family of John and Catherine MacMillan, their governess and female servant. The 1841 Census didn't record who was head of household or the relationship of others to that person so we can only assume that John was an uncle. Place of birth isn't recorded only that he was born outside the county of Lanarkshire ('N'). His age is given as 25 but would have been rounded down to the nearest five. 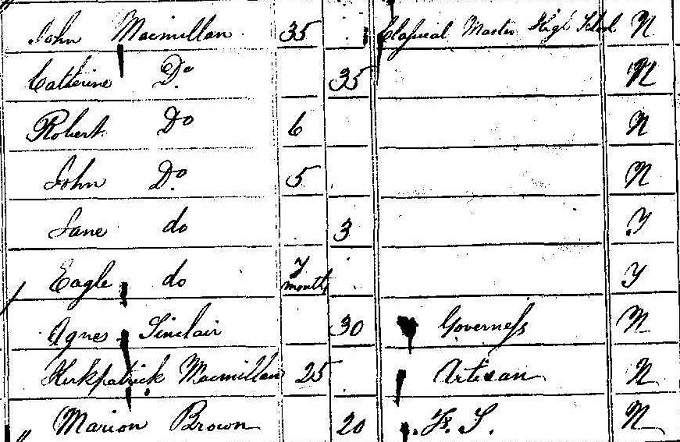 In 1851, Kirkpatrick McMillan, 36, blacksmith, was enumerated at Courthill. The census return for the parish of Keir shows that he was living with his parents, sister, a nephew and a niece. There were also two apprentices in the household - one being his nephew William.

Kirkpatrick McMillan, blacksmith at Courthill and Elizabeth Gordon Goldie, servant at Barjarg, were proclaimed on 16 April 1854. The entry in the OPR for Keir state that they 'have given in their names in order to proclamation of Banns [on 16 April 1854] and were regularly proclaimed the 23 day of April 1854 and married that week'. Unfortunately the session clerk has made quite a few errors in the entry and hasn't included the actual date of marriage!

In 1861, Kirkpatrick McMillan, 48, blacksmith, was enumerated at Courthill. The census return for the parish of Keir shows that he was living with his wife, two children, his sister and an apprentice.

In 1871 Kirkpatrick McMillan, 58, blacksmith, employing two apprentices, was enumerated at Courthill. The census return for the parish of Keir shows that he was a widower and living with his two children, his sister and the two apprentice blacksmiths. One was a nephew, Robert McMillan, whose birthplace was Glasgow.

Kirkpatrick McMillan died on 26 January 1878 at Courthill aged 65 years. The entry in the statutory register of deaths for the parish of Keir in the county of Dumfriesshire records that he was a widower and that the cause of death was phthisis pulmonaris - a form of tuberculosis. The informant was his son John.

Kirkpatrick MacMillan died intestate. An inventory of his personal property was registered at Dumfries Sheriff Court on 1 August 1878 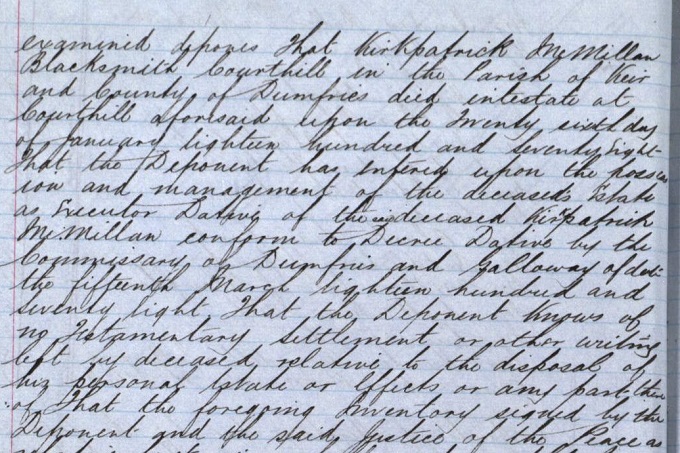