John Ballantyne worked as a clerk at a London bank before returning to Kelso to help in his father's business. In 1805 he moved to Edinburgh to work with his brother, James Ballantyne, printer. In 1809 they set up John Ballantyne and Company to publish the ‘Quarterly Review’ and other titles but the business wasn’t successful and closed a few years later. John Ballantyne was hired by Sir Walter Scott as his literary agent. Through his share of profits in the Waverley novels he was able to adapt his former publishing premises into an auction house and to purchase Harmony Hall formerly owned by William Creech. He retired due to ill-health in 1819 and settled back in the Borders until his death at his brother’s home less than two years later.

John Ballantyne was born on 13 May 1774, the son of John Ballantyne and Jean Barclay, his spouse. The entry in the Old Parish Register (OPR) for Kelso gives the date of baptism as 22 May. The witnesses were John Waldie of Henderside Esquire and David Ballantyne. 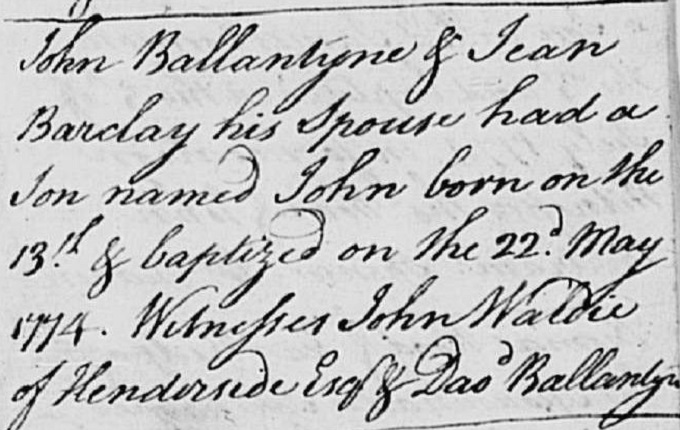 John Ballantine Esquire, died on 16 June 1821 at 10 John Street. The entry in the Old Parish Register for Canongate is dated 20 June and gives the place of burial as in the north side of Mr James Ballantine's ground on the East side of the Yard. The type of burial is 'turf'. This OPR volume (30) which covers burials, 1811-1830, is described as a duplicate in the 'List of Old Parish Registers'.

A second entry in volume 31 of the same OPR records the same details.

A third entry in volume 36 gives John Ballantyne's age at death as 47 years.

The testament of John Ballantyne, late Bookseller in Edinburgh, was registered at Edinburgh Sheriff Court on 21 February 1822. The trust disposition and settlement names Sir Walter Scott of Abbotsford, Baronet, William Erskine of Kinnedar, advocate, George Hogarth, Writer to the Signet, Duncan Cowan, Paper Manufacturer at Edinburgh and James Ballantyne, Printer as trustees. It also refers to an ante-nuptial contract of marriage between the deceased and Mrs Hermione Ballantyne his wife, dated 26 April 1797 and recorded in the Books of Session the first day of May following. Their marriage hasn't been traced in the Old Parish Registers.