James Geikie served on the Geological Survey of Scotland until 1882 when he succeeded his brother, Sir Archibald Geikie, as Murchison professor of geology and mineralogy at the University of Edinburgh. He was elected a Fellow of the Royal Society in 1875. He studied the Scottish landscape; published works on the effects of the Ice Age and inter-glacial periods; and contributed to advances in geological research and teaching. He was dean of the university's Faculty of Science from 1891 to 1913 and co-founder and president of the Scottish Geographical Society. The conservationist, John Muir, named the Geikie glacier in his honour.

James Geikie (here spelt Geekie) was born on 23 August 1839, the son of James Geekie, perfumer, and Isabella Thom. The entry (number 1490) in the Old Parish Register (OPR) for Edinburgh gives the date of baptism as 31 December 1853 and the place of birth as Hope Park, Edinburgh. Entries 1488-1489 and 1491-1495 are for his brothers and sisters who were born between 1835 and 1852. Each gives place of birth. It isn't unusual to find baptisms of several children from the same family registered together in this way in the OPRs. 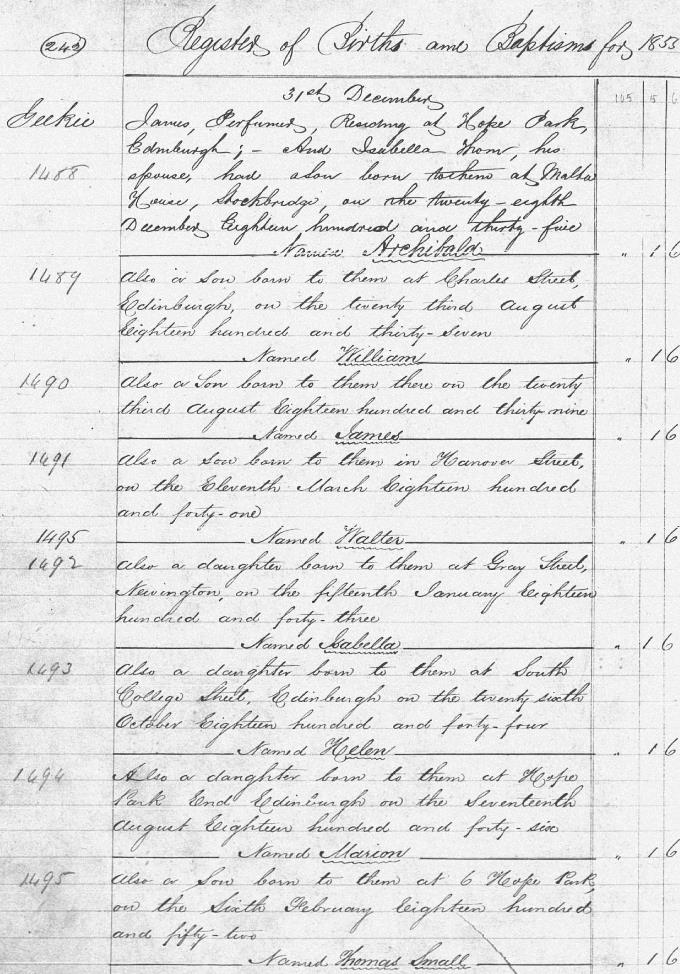 In 1841, James Geikie, aged 2, was enumerated at 47 Hanover Street with his parents and three brothers. The census return fo the parish of St Andrew Edinburgh gives his father's occupation as perfumer. Isabella Geikie was the only member of the family who wasn't born in the county (No).

In 1851, James Geikie (here spelt Geekie), aged 11, scholar was enumerated with his family at Boroughloch in Edinburgh. The census return for the parish of St Cuthbert's shows that the household included his two grandfathers - Archibald Geikie, retired perfumer and William Thom, retired shipmaster - and that his mother's place of birth was Dunbar in East Lothian.

In 1861 James Geikie, 21, general clerk in WS (Writer to the Signet) office, was enumerated at 16 Duncan Street in Edinburgh. The census record for the district of Newington gives his father's occupation as perfumer employing one boy and one girl. His brother Archibald's occupation is geologist.

In 1871 James Geikie, 31, was enumerated at the same address with his parents, two sisters and one servant. The census record for the district of Newington gives his occupation as District Surveyor of Geological Survey of Scotland and his father's as teacher of music.

James Geikie, geologist, married Mary Simson Johnston on 8 July 1875 according to the forms of the Free Church of Scotland. The entry in the statutory register of marriages for the registration district of Jedburgh in the county of Roxburgh gives the place of marriage as Crailinghall. He was aged 35 and based in Perth. His father, James Stewart Geekie, was a teacher of music.

In 1901 James Geikie, 61, professor of geology was enumerated with his wife and children at Kilmorie, Colinton Road in Edinburgh. The census return for the district of Newington shows the household included a visitor and three domestic servants - a cook, nurse and handmaid.

In 1911 James Geikie, 71, professor of geology at the University of Edinburgh, was enumerated at 83 Colinton Road. The census record for the civil parish of Merchiston in Edinburgh shows that one of his sons was a mining engineer and the other a musician. The household also included his brother, Archibald Geikie, 75, retired (Civil Service).

James Geikie, university emeritus professor of geology, died on 1 March 1915 aged 75 years. The entry in the statutory register of deaths for the district of Morningside gives the place of death as his home at 83 Colinton Road in Edinburgh.

The will of James Geikie, professor of geology and minerology in the University of Edinburgh, was registered at Edinburgh Sheriff Court on 27 March 1915. In it he made his wife, Mary, his sole heir and executor.

The inventory of his estate was registered on 3 October 1915. It includes valuations for the publication of his books in Scotland and England.