Founder of the Free Church of Scotland

Thomas Chalmers was professor of moral philosophy at St Andrews University from 1823. He was an acclaimed religious orator and in 1843 left the Church of Scotland with other ministers to found the Free Church, an event known as 'The Disruption'. He was the first principal of the new church's college in Edinburgh.

Thomas Chalmers was born on 17 March 1780, the son of John Chalmers, merchant, and Elisabeth Hall. The entry in the Old Parish Register (OPR) for Anstruther Easter is dated 19 March.

Thomas Chalmers married Grace Pratt on 9 August 1812. The entry in the Old Parish Register for Kilmany gives details of the fee collected.

In 1841 Thomas Chalmers, professor of theology, was living with his wife, children and three servants in Burntisland in the county of Fife. His age is given as 60 but would have been rounded down to the nearest five in 1841. 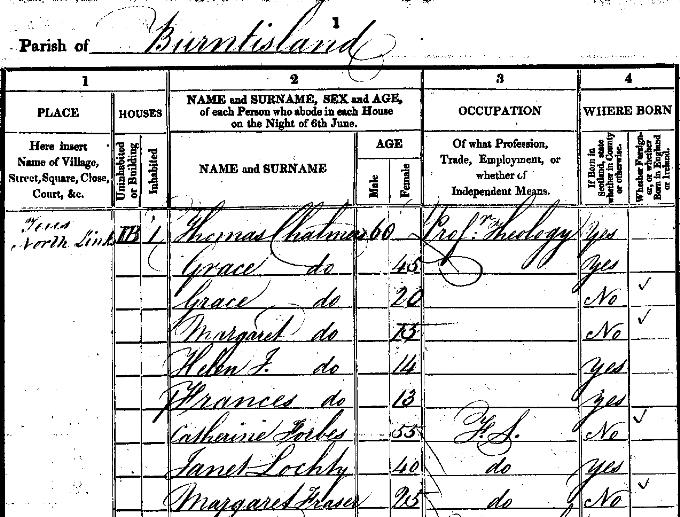 Thomas Chalmers, aged  67, died on 31 May 1847 at Churchill, Morningside. The entry in the Old Parish Register for St Cuthbert's in Edinburgh gives his designation as 'Corresponding member of the Institute of France, Principal and Professor of New College, Edinburgh' and the cause of death as 'disease of heart'.