Thomas Blake Glover has been described as the founding father of Japan's economic miracle. His contribution to the country's industrialisation includes the introduction of the first railway locomotive and first mint; mechanisation of coal-mines; the founding of the Japanese Navy; and modernisation of the shipbuilding industry. His own company grew into Mitsubishi. He was known as the 'Scottish Samurai' and was the first non-Japanese person to be awarded the prestigious Order of the Rising Sun. He died on 16 December 1911 in Tokyo. His former house in Nagasaki is a top tourist attraction and the family home, Glover House, Bridge of Don, is open to the public as a restored Victorian House, telling his story.

Thomas Blake Glover was born on 6 June 1838, the son of Thomas Berry Glover, Chief Officer of the Coast Guard, and Mary Findlay. The entry in the Old Parish Register (OPR) for Fraserburgh gives the date of baptism as 12 July and the witnesses as bank agents.

In 1841 Thomas Glover, aged three, was enumerated with his family and three servants in Commercial Street, Fraserburgh. The census record shows that his parents and two older brothers were born in England (E). 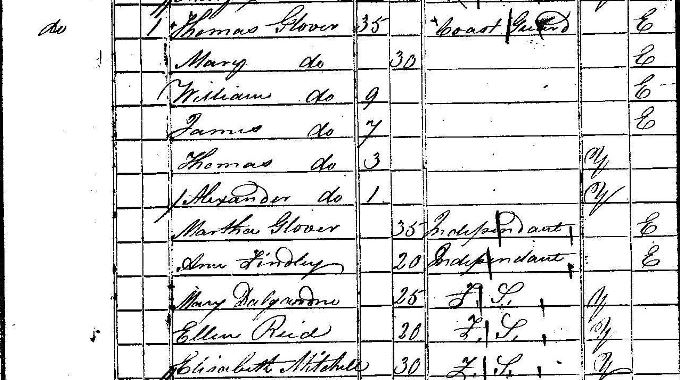 By 1851 the family had moved to the Coast Guard Station at Bridge of Don. Thomas, aged 13, scholar was living with his parents, four brothers, sister and a servant. The census record gives the birth places of his mother and the older children as Fordyce in Banffshire.