Chemist and inventor of waterproof fabric

Charles Macintosh set up the first alum works in Scotland In 1797 and went on to develop new methods for the bleaching, printing and dyeing of cloth and for the manufacturing of iron. He was elected to the Royal Society for discoveries in chemistry. He produced his famous waterproof material by combining naphtha - a by-product of tar - with rubber and obtained a patent for the process in 1823. 'Mackintosh' remains a popular name for a raincoat to this day.

Charles Macintosh (registered as Mcintosh) was born on 29 November 1766, the son of George Mcintosh, merchant, and Mary Muir.The entry in the Old Parish Register for Glasgow includes the names of two witnesses to the baptism which was held on 10 December.

In 1841, Charles Mcintosh, aged 74, merchant in Glasgow, was living at Antermony House in Campsie in the county of Stirlingshire. The census record shows that the household included his wife, Mary, their children, a butler and six other servants. None of the family were born in the county. 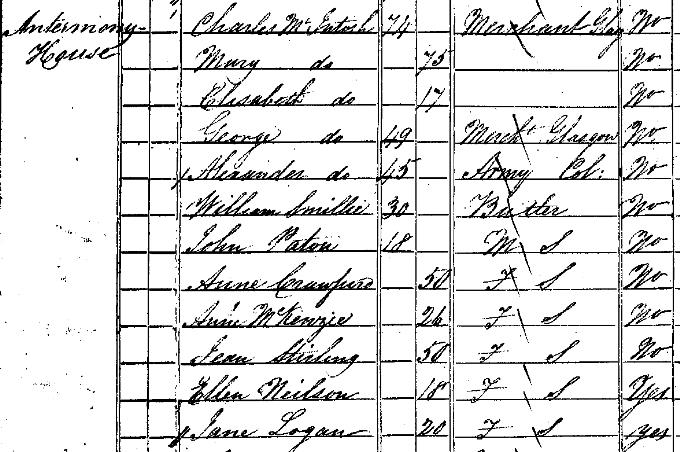 Charles McIntosh died on 25 July 1843. The entry in the Old Parish Register of burials for Glasgow gives his residence as Campsie and Dunchattan Galloway and the place of burial as Provost Anderson's lair on the east wall in the old churchyard. The cause of death was influenza and age at death 76 years. The register has a section on 'style of funeral' and records that a hearse, 40 carriages, four horses and 14 ushers were used. The charge was one pound and five shillings.