Johnnie Walker set up as a grocer in Kilmarnock and started to blend whisky to achieve a consistent taste. This worked well and the business was developed further by his son and grandsons. They produced a commercial blend and used a square bottle for more compact storage and ease of transport. Johnnie Walker Red Label and Johnnie Walker Black Label went on to become one of the most famous and widely-distributed brands of blended whisky in the world.

John Walker was born on 25 July 1805, the son of Alexander Walker and Elizabeth Gemmel in Toddriggs. The entry in the Old Parish Register (OPR) for Riccarton
was added to the register in 1823 having been 'omitted in 1805'.

John Walker married Elizabeth Purvis on 19 November 1833. There are two entries in the Old Parish Registers. The first in the OPR for Riccarton (her parish) is dated 16 November and states that they 'entered their names, were regularly proclaimed three times on one sabbath and married by Mr Moody on the 19th Nov[embe]r'.

The second in the OPR for Kilmarnock (his parish given as Low Church parish) is dated 19 November 1833 and confirms that 'after proclamation were married'.

In 1841, John Walker, 35, grocer was enumerated at Kilmaurs Road in Kilmarnock.  Ages over 15 years were rounded down to the nearest five in 1841.The census return shows the household included his wife, Elizabeth, and children Alexander (4), Robert (2) and Elizabeth (1 month). All were born in the county (Y).

In 1851 John Walker, 45, grocer and spirit dealer, was emumerated at Walker's Land, India Street in the parish of Kilmarnock. The census return provides information about his two daughters and three sons.

John Walker, 52, grocer died at 9:30 pm on 19 October 1847. The entry in the statutory register of deaths for Kilmarnock gives the place of death as his home at India Street in Kilmarnock, his father's occupation as farmer. The place of interment was St Andrews Burying Ground as certified by the sexton. The informant was his son Alexander Walker who was present at the death.

John Walker's will was registered on 28 November 1847 at Ayr Sheriff Court (SC6/44/24, pp 943-954). It includes an inventory which records his occupation as grocer and spirit merchant. 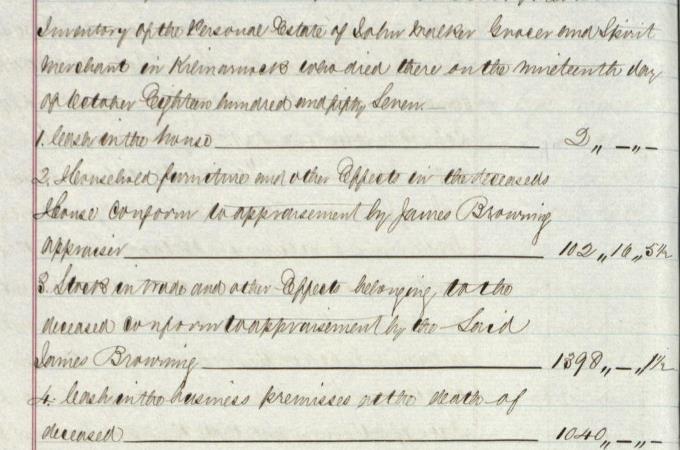