George Washington Wilson studied art in Edinburgh and London before moving to Aberdeen in 1849 to pursue a career as a portrait miniaturist. From 1852 he took up portrait photography. Success led to commissions from the royal family and the creation of a photographic record of the construction of Balmoral Castle in 1854-5. In the 1860s his technical development of outdoor photography led him to concentrate increasingly on landscape, rather than portraiture. He also developed photographic printing for the mass market and by the time he died in 1893 his business was one of the largest publishers of photographic prints in the world.

George Washington Wilson was born on (or about) 7 February 1823, the son of George Wilson and Elspet Herd of Brownside. The entry in the Old Parish Register (OPR) for Alvah in the county of Banffshire shows his birth had not been registered 'at the proper time' and was inserted on the basis of a declaration made by John Webster, schoolmaster at Forglen, before the late Sir Robert Abercromby, Justice of the Peace  for Banffshire on 25 November 1851. This declaration was held by the London Indisputable Life Policy Company. 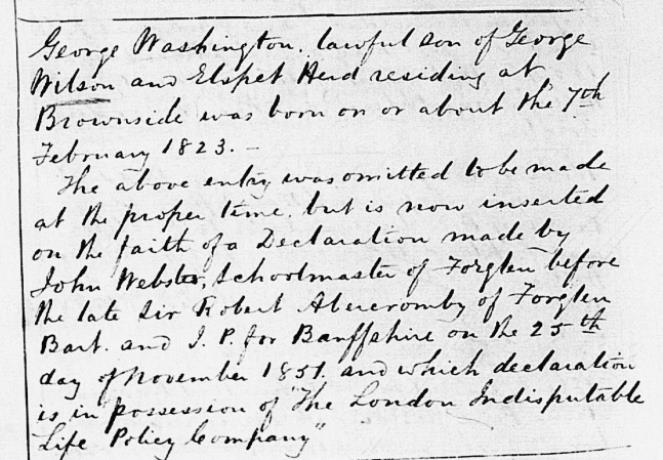 George Washington Wilson married Maria Ann Cassie on 18 December 1849. The entry in the Old Parish Register for Banff (her parish) is dated 15 December, gives his occupation as painter in Aberdeen, her name as Mary and shows that they were married in the parish church in Banff after proclamation of banns.

A second entry in the OPR for Aberdeen (his parish) provides different details - his occupation (artist in Aberdeen), the marriage date (18 December), Maria's father (the late William Cassie, innkeeper in Banff) and the names of witnesses.

In 1851, George Wilson, 28, portrait painter, was enumerated with his wife, daughter and brother at 13 Netherkirkgate in Aberdeen.

In 1861, George W Wilson, 39, artist was enumerated with his family at 25 Crown Street in the parish Old Machar in the Royal Burgh of Aberdeen. The household schedule continues on the following page of the enumeration book.

In 1871, George Washington Wilson, 48, photographer, was enumerated at Queen's Cross in Old Machar with his family and three servants.

In 1881, George Washington Wilson, 57, master photographer (employing 15 men, 21 women, two boys and two girls) and town councillor was at the same address with his family and servants. His name has been transcribed (and indexed) as George G Wilson.

In 1891, George W Wilson, 67, retired photographer, was again at Queen's Cross. The census return for Old Machar shows that the household included his son, Charles, a photographer and two servants.

George Washington Wilson, 70, retired photographer, died on 9 March 1893 in his own home. The entry in the statutory register of deaths for the district of Old Machar in Aberdeen gives his late father's occupation as Lieutenant-Major in the Royal Artillery.

In his George Washington Wilson appointed his wife, Maria Ann Cassie, and three of his sons, John, Louis and Charles, all photographers in Aberdeen, to be his trustees. The inventory has a valuation of his shop at 25 Crown Street in Aberdeen and a list of his shareholdings includes the Aberdeen Swimming Bath Company, the Aberdeen Theatre and Opera House Company and the Aberdeen Music Hall Company. The total value of his moveable estate is given as £7258 16s 5d.

He had nine children - five boys and four girls. His daughters each received £500. Generous provision was made for his three photographer sons and his wife. Bequests to his other two sons, described as being abroad, suggest more cautious provision. His eldest son, George, was to inherit his rightful share of the moveable estate (an equal share with his siblings of one third of its value) with the following advice: 'I recommend him to authorise my Trustees to apply the same in the purchase for him from a good Insurance or other like Company of an annuity payable to him quarterly or half yearly during his lifetime'. His son, William, was to inherit an equal share with his sisters of the residual estate after the death of their mother.

The images of the original document are in jpeg format (approximately 140 KB):