Elsie Inglis played an important role in the Scottish Federation of the National Union of Women's Suffrage Societies. She established the first maternity hospital staffed by women in 1901 but it was her founding of the Scottish Women’s Hospitals for Foreign Service during the First World War that made her famous. She served in Serbia and then Odessa but had to return home because of ill health. She died in Newcastle on 26 November 1917. Her funeral was held in Edinburgh and she was buried in the city’s Dean Cemetery.

In 1881 Eliza Inglis, 16, scholar, was living with her family and three servants at 10 Bruntsfield Place in Edinburgh  The census record for the district of Newington is over two pages and gives her place of birth as India. Her mother, Harriet, sister Eva and brother Horace were also born there. They are all recorded as British subjects. Her father, John, had retired from the Bengal Civil Service.

In 1891 Elsie M Inglis, 26, medical student, was living with her father, now a widower at 16 Chalmers Street in the district of St Giles, Edinburgh.

In 1901 Elsie M Inglis, 36, physician and surgeon, was living at 8 Walker Street in Edinburgh. The census record for the district of St George gives her as joint head of household with Jessie MacGregor, physician.

In 1911 census Elsie M Inglis, 46, hospital surgeon, was a visitor at the home of Florence M B White, social worker matron, in Strathkinness Village. The birthplace column in the district of St Andrews and St Leonards gives her details as born in India, United Provinces and of European origin.

The testament of Elsie Inglis was registered at Edinburgh Sheriff Court on 30 May 1918. The introductory clause of the inventory records that Elsie Maud Inglis MBCM, Licentiate of the Royal College of Physicians and Surgeons, Edinburgh, late of number eight Walker Street, Edinburgh, died at Newcastle upon Tyne, on 26 November 1917.

The inventory refers to small sums owed to her by the Scottish Women's Hospital for Home and Foreign Service for the quarter ending 31 December 1917 and from the Bengal Civil Fund. Her two shares in Muir Hall of Residence were considered to be of no value.

Elsie Inglis left all her moveable and heritable property to her niece Florence Elsie Inglis MB ChB who was based in London. 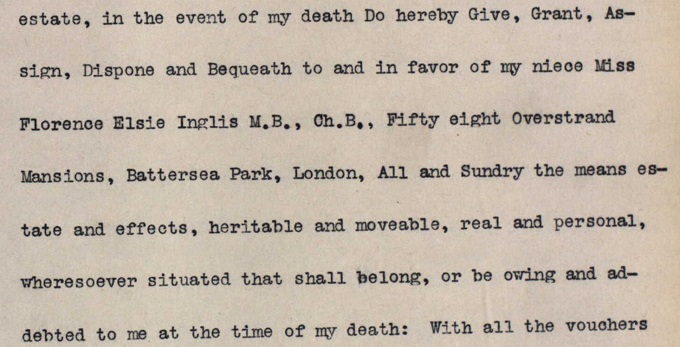