Thomas Nelson senior was born in 1780 in Scotland. As a young man he moved to London, where he worked as an apprentice publisher. Upon returning to Scotland, he used his experience to establish his own bookshop at 2 West Bow, Edinburgh in 1798. Nelson had recognised a gap in the market for selling second hand books, and, in addition to selling books at his shop he travelled to Edinburgh markets and county fairs. The business soon expanded as Nelson began printing cheap standard editions of non-copyright works; the first work he published came in the form of monthly instalments of John Bunyan’s Christian allegory, ‘The Pilgrim’s Progress.’

Nelson’s business was becoming very successful, and, in 1829, he employed James McDonald to act as his representative to visit book shops in southern Scotland and northern England. This innovative decision led to a great expansion of the business with a London office opening at 35 Paternoster Row in 1844, and a New York office at 42 Bleeker Street in 1854. He was the first British publisher to establish a branch in America.

In the 1830s his sons William and Thomas joined the business. William began by working on marketing, and Thomas on editing and producing books. By the early 1840s, the business required a bigger office. In 1846 they moved to a larger, custom-built premises at Hope Park in Edinburgh. Here, the Nelson family had a workforce of 600 people working on all areas of production, including printing, stereotyping, engraving, bookbinding and lithographing.

In 1850 Thomas Nelson junior invented a rotary press with curved stereotyped plates fixed on cylinders which printed quicker and on both sides of the paper; this soon became very popular, and was still used for decades into the 20th century. The same year, Nelson transferred the management of the business to his sons, and by 1860 the company was the leading publisher of cheap colour-printed books. 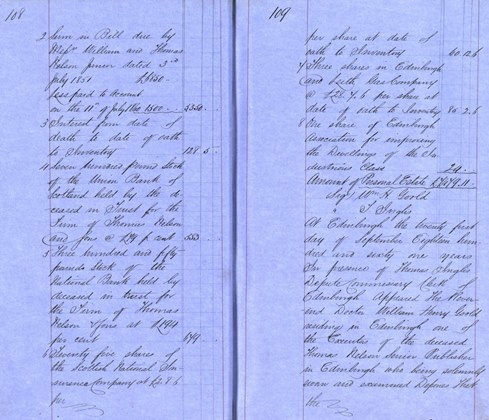 William died in 1887 and Thomas in 1892. They were succeeded by George Brown, Thomas’ nephew.