Andrew Carnegie emigrated with his family to Pennsylvania in the United States in 1848. He made his fortune there in iron and steel production. The British, American and Canadian public library systems benefited greatly from his generosity and the many Carnegie library buildings are testament to this. He also set up a trust for the Scottish universities. His birthplace in Dunfermline is now a museum.

Andrew Carnegie was born on 25 November 1835, the son of William Carnegie, Reform Street and Margaret Morrison. The entry in the Old Parish Register (OPR) for Dunfermline in the county of Fife includes the names of two witnesses - Thomas Morrison, senior and junior.

In 1841 Andrew Carnegie (here spelt Carnagie), aged 5 years, was enumerated in the household of his uncle, George Lauder, fruiterer. The census record for an address in the High Street, Dunfermline, includes entries for Seaton Lauder, his aunt and George Lauder, aged four, his cousin. All were born in the county (Yes).

Andrew Carnegie gave away $350,695,653 (approximately $4.3 billion in today’s money) during his lifetime. After his death a further $30 million was donated to institutions, charities and pensioners. In his will he made provisions for his wife, Louise Whitfield Carnegie, their daughter, Margaret, relatives and friends on both sides of the Atlantic, his servants, and labourers and crofters on his Skibo Estate, Dornoch, Sutherland.

The inventory of his estate in Scotland was presented at Edinburgh on 21 October 1920. It was modest compared to that recorded in New York with a value of £67,541, 8 shillings (s) and 2 pence (d) which would be in the region of £1.96 million today (based on The National Archives currency converter). The introductory clause records that Andrew Carnegie, late of the County of New York, USA died at Lenox in the State of Massachusetts on 11 August 1919. 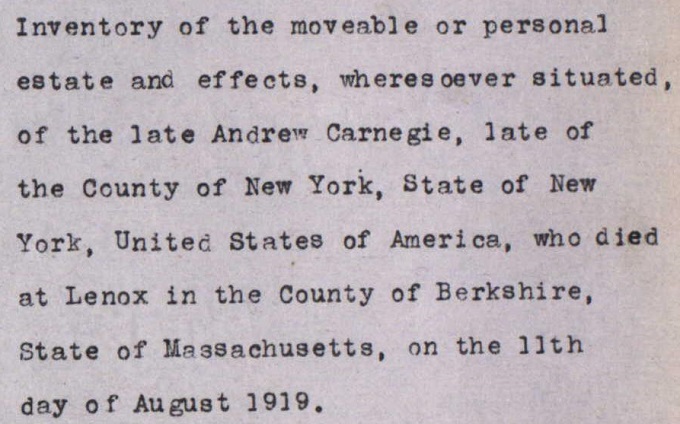 It is almost entirely made up of lists of people on the Skibo Estate. Their gross annual feu duties and half-yearly rents up to Martinmas (11 November) 1919 were due to Andrew Carnegie as feudal superior. There are also names and details of tenant farmers and those who had sold livestock, timber or fruit.

The last few pages provide valuations of the contents of Skibo Castle, Inveran Hotel and Achinduich Lodge at Invershin. Farm stock and implements, his steam yacht "Seabreeze" and the books at Skibo Castle (valued by Hew Morrison, Principal Librarian at Edinburgh Public Library) are listed separately.