George MacDonald attended King's College, Old Aberdeen, before becoming a tutor and moving to London. There he met his wife, Louisa Powell. He trained as a Congregational minister, was ordained in 1850 but resigned in May 1853. He moved to Manchester, where his brother Charles lived, to begin a career as a writer. He produced poems, collections of sermons, fairy tales for children, fantasies for adults and novels based on memories of his Aberdeenshire childhood and ancestral links to the MacDonalds of Glencoe and Culloden. Following literary success, he went on a lecture tour of the USA in 1872-3 where he met leading American writers. He was a mentor to Lewis Carroll and a close friend of John Ruskin. In 1879 the family moved to the Italian Riviera due to his poor health. He lived there until his death on 18 September 1905. His ashes were buried at the English Cemetery in Bordighera. George MacDonald's work was a major influence on later modern fantasy writers and on the Kailyard School of Scottish fiction.

George MacDonald was baptised on 10 December 1824, the son of George MacDonald, manufacturer in Huntly and Helen McCay. The entry in the Old Parish Register (OPR) for Huntly in the county of Aberdeen gives the two witnesses as Charles MacDonald and James MacDonald.

The entry is out of sequence. The session clerk has added a note at the top of the page ‘for George McDonald see 17 Ja[nuar]y 1825’.

In 1841, George McDonald, 15, was enumerated at Bleachfield Cottage with his family. His uncle, James McDonald, manufacturer, and family were living in the adjacent property. The census return for the enumeration district of Drumblade in Aberdeenshire shows the household included his father, a farmer, his stepmother, Margaret, his brothers Charles, Alexander and John, and half-sister Isabella. There were also two farm servants. His mother had died in 1832 and his father remarried in 1839. Margaret and his aunt Jane in the other household are the only two who weren't born in the county ('N'). Ages were rounded down to the nearest five for those aged 15 or over - George and his older brother, Charles, are recorded as 15. For both households the surname is McDonald rather than MacDonald. 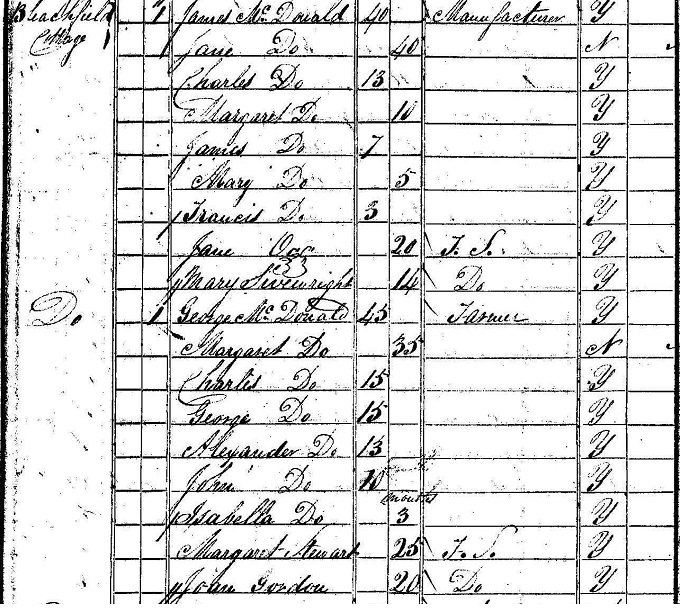