Susan Edmonstone Ferrier was born on 3 July 1782, the daughter of James Ferrier, Writer to the Signet and Principal Clerk of Session, and Helen Coutts. She was educated at the family home in Edinburgh's New Town. Her first novel 'Marriage', a social satire, was published by William Blackwood in 1818 and was an immediate success. Readers tried to identify the anonymous author and the people who had inspired the characters. After her mother's death she kept house for her father who leased East Morningside House for the summer months. Two further novels, 'The Inheritance' (1824) and 'Destiny' (1831), were also well received. The latter was dedicated to Sir Walter Scott whom she had visited at Abbotsford. There are plaques on both gateposts to East Morningside House in Edinburgh which commemorate Susan Ferrier's connection to this listed building.

In 1841 Susan Ferrier was enumerated at 10 South Nelson Street in Edinburgh. The Census return for the parish of St Mary in the registration district of Edinburgh shows she was living on independent means (Ind) and was born in the county (Y) of Midlothian. Her age would have been rounded down to the nearest five in the 1841 Census - 55 could therefore be between 55 and 59 years. There were no other members of the household.

In 1851 Susan E Ferrier, 66, head of household, unmarried (u) was enumerated at the same address with two domestic servants. The Census return for the parish of St Mary in the registration district of Edinburgh, gives her occupation as proprietrix of 7 Nelson Street and her birth place as Edinburgh.

Miss Susan Edmonstone Ferrier died at her brother's house, 38 Albany Street, on 5 November 1854. The entry in the Old Parish Register for St Cuthberts gives her age at death as 72 and the cause of death as 'Decay'. The register is over two pages. The last column on the first page is for 'Relationship if a married female or child' and the first on the second is for 'Name and designation of head of household or other relative'. Both are left blank. The top of the page and the October entries give date of interment but those for November are headed date of death - paid interments resumed.

The testament of Susan Edmonstone Ferrier was registered at Edinburgh Sheriff Court on 1 December 1854. The introductory clause to the inventory of her personal estate confirms that her date of death was 5 November 1854 and that the executor nominate was her brother Walter Ferrier. 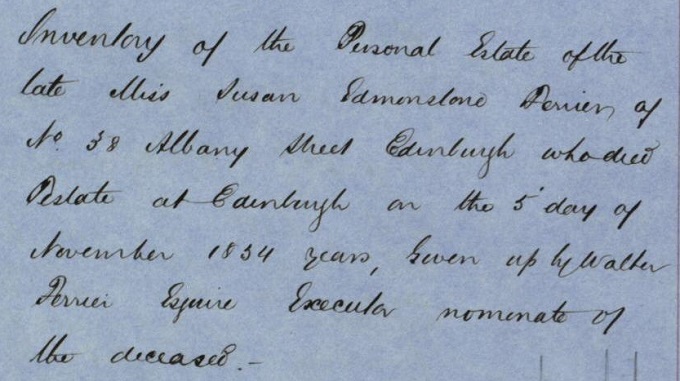 In her will Susan Ferrier wrote that ' having given away all the usual tokens of remembrance such as rings, seals, broaches, etc I have little to offer as suitable memorials for dear relatives and friends'. She made individual bequests of the family bible, her books, pictures, furniture and other possessions. Thomas Ferrier was to receive four volumes of Burns' letters and poems, one of Scott's quarto volumes and views of Inveraray - author's copy.