During his childhood William Chambers was an avid reader of books from a circulating library in Peebles. He moved with his family to Edinburgh where he started an apprenticeship with John Sutherland, Bookseller. He set up on his own in 1818 and taught himself bookbinding and type-setting before venturing into publishing. He worked with his brother, Robert Chambers, to launch a successful weekly paper, ‘Edinburgh Journal‘, in 1832 and produce a gazetteer of Scotland the following year. They founded W and R Chambers, publishers of school text-books, People’s Editions of literary works and the famous Chamber’s encyclopaedia and Chamber’s English dictionary. William Chambers was elected Lord Provost of Edinburgh in 1865 and worked to improve sanitary conditions in the city as well as the restoration of St Giles Cathedral. Chambers Street is named after him. His statue stands outside the National Museum of Scotland there.

William Chambers, son of James Chambers, weaver in Peebles and Jean Gibson his spouse, was born on 7 April 1800. The entry in the Old Parish Register (OPR) for Peebles records that he was baptised by the Reverend William Dalgliesh, minister of Peebles. The witnesses were William Chambers and William Gibson both weavers in Peebles.

In 1841 William Chambers, 41, publisher, was enumerated at 13 Manor Place. The census return for the parish of St George in Edinburgh records that the household included his wife, Harriet, and three female servants. (National Records of Scotland, 1841/685-1/44, page 14)

In 1851 William Chambers Esquire, 50, writer and publisher of popular literature and landed proprietor, was enumerated at Mansion House, Glenormiston. The census return for the parish of Innerleithen shows the household included three servants. The place of birth for his wife, Harriet, is recorded as England, London.

We hold a plan of the 'Estate of Glenormiston, the property of William Chambers LLD, with vignettes of the Mansion House, Lodge, Summer House and Stables' (National Records of Scotland, reference RHP3601). The Ordnance Survey Name Books on the ScotlandsPlaces website provide further information about William Chambers and the estate.

In 1871, William Chambers, 70, publisher and landowner was enumerated at 13 Chester Street. The census return for the district of St George in Edinburgh shows there were now four servants and that the property had 19 rooms with one or more windows. This information was collected to assess housing conditions and was not related to the window tax.

In 1881 William Chambers, 80, editor, publisher and landowner, was enumerated at the same address - 13 Chester Street. The census return for the parish of St George in Edinburgh shows that the household included his wife and three servants. (National Records of Scotland, 1881/685-1/91, page 20)

William Chambers, printer and publisher, died on 25 May 1883, aged 83 years. The entry in the statutory register of deaths for the district of St George in the City of Edinburgh gives the place of death as his home at 13 Chester Street and the cause of death as pneumonia. The informant was his nephew, Alex Kirkwood.

The testament of William Chambers of Glenormiston, Doctor of Laws, was registered at Edinburgh Sheriff Court on 26 May 1883.

In his will, William Chambers had nominated trustees who were to be his sole executors. They included his nephews: Robert Chambers, publisher in Edinburgh, and Alexander Kirkwood, die cutter there (page 177). He made provisions for his wife, Harriet Seddon Clark or Chambers (pages 179-181); an annuity of £45 to Margaret Reid for the property in Peebles purchased for the Chambers Institution he'd established there (page 183) and free rental for its directors (page 187); legacies for other members of his family (pages 184-185); and a sum not exceeding £20,000 to complete the restoration of the 'ancient church of St Giles' in accordance with his plans and specifications (page 185-187). He also requested that the surviving partners of W and R Chambers carry on the business of the firm under the existing contract of copartnery for seven years after his death (pages 188-193).

This extract shows that among the provisions for his wife, Harriet, were the use of all his books, papers and pictures, his house at 13 Chester Street and his Stable and Coach House in Morrison Street. 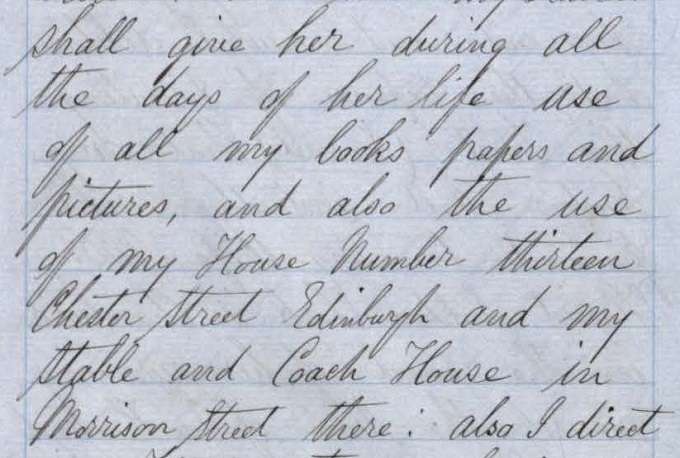 The inventory records the value of William Chambers personal and moveable effects and any monies due. This extract refers to the printing offices in the High Street, Edinburgh, rented to Messrs W and R Chambers, Publishers. 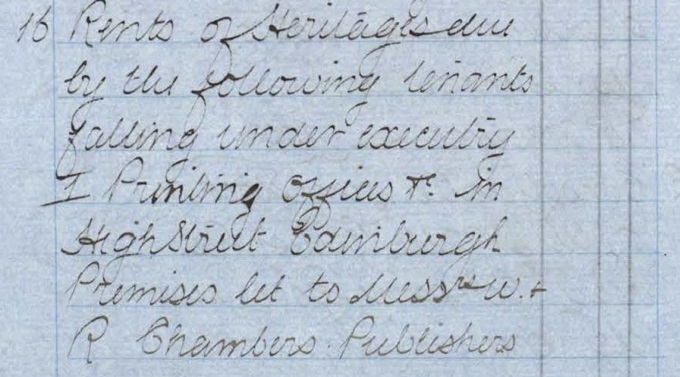 An eik is an addition to a testament. In this case a separate five page document was presented at Edinburgh on 13 July 1883. The detail below shows that the executors had received a sum deposited by William Chambers 'with the Secretary of State for the Home Department in London in respect of the Baronetcy which Her Majesty proposed to confer upon him'. They hadn't been aware that this was to be returned when they registered the original inventory on 9 June 1883. 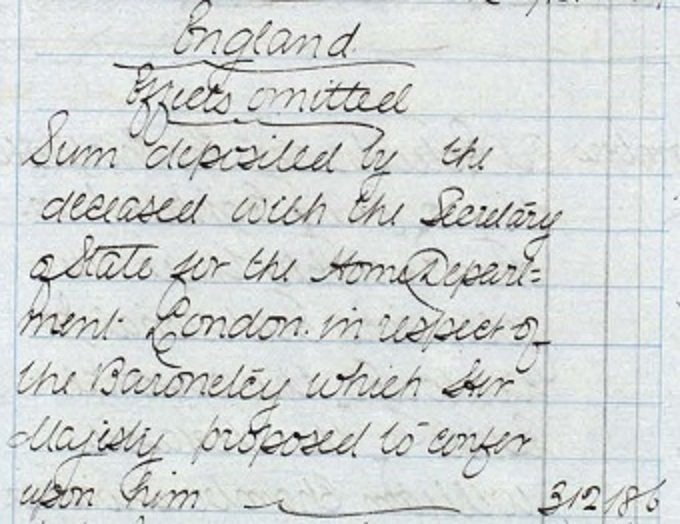