George Coats had a successful career in the Paisley thread industry founded by his grandfather, James Coats. He worked for the family firm run by his father and uncles. It amalgamated with its American associates and other businesses to become J and P Coats Ltd. By the early 20th century it was one of the largest companies in the world. George Coats was created baron on 29 June 1916. At the time of his death he was one of the wealthiest men in Scotland. The records of Coats Viyella plc, 1830-2002, which cover the period of his involvement with J and P Coats, are held by University of Glasgow Archive Services.

George Coats was born on 11 February 1849 the lawful son (S. L.) of Thomas Coats, Thread Manufacturer, Ferguslie House and Margaret Glen. The entry in the Old Parish Register (OPR) for Paisley Abbey gives the date of birth in one column and the date of registration, 31 December 1855, in the next. Statutory civil registration was introduced in Scotland on 1 January 1855 but some of the OPRs were updated for a couple of years after that.

In 1851 George Coats, 2, was enumerated with his family at Ferguslie House. The census return for the district of Paisley Abbey in the county of Renfrew gives his father's occupation as cotton thread manufacturer. (National Records of Scotland, 1851/559/57, page 19)

In 1861 George Coats, 12, scholar, was enumerated with his family at Ferguslie House. The census return for the district of Paisley Abbey burgh in the county of Renfrew gives his father’s occupation and employer details as: Sewing Cotton Manuf[acture]r, Acting Partner, firm of J and P Coats. Employing 1172 persons. Also coal master, Acting Partner of the Nilshill Coal Co[mpany] employing 150 persons. 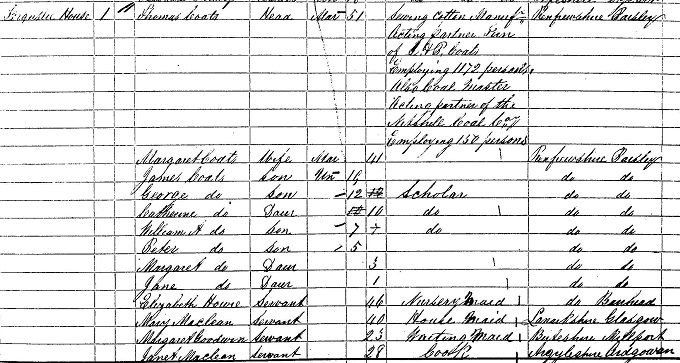 In 1871 George Coats, 22, was enumerated with his family at Ferguslie House. The census return for the district of Abbey burgh in the county of Renfrew gives his occupation as commercial clerk (National Records of Scotland, 1871/559-1/28, page 18)

George Coats, 31, Thread Manufacturer, married Margaret Lothian Black on 23 December 1880. The entry in the statutory register of marriages for the district of St George in the City of Edinburgh gives his address as Ferguslie House, Paisley. They married at St Mary’s Cathedral in Edinburgh after banns according to the forms of the Episcopal Church.

In 1881 George Coats, 32, thread manufacturer, was enumerated with his wife at 5 Claremont Terrace in Glasgow. The census return for the district of Kelvin in the county of Lanark shows that the household included a visitor, James T Black, publisher, widower - his father-in-law. (National Records of Scotland, 1881/644-9/47, page 6)

In 1891 George Coats, 42, gentleman, living on private means, was enumerated at Race Course Road, Belisle (Belleisle), with his wife and two daughters. The census return for the district of Ayr lists 13 servants. 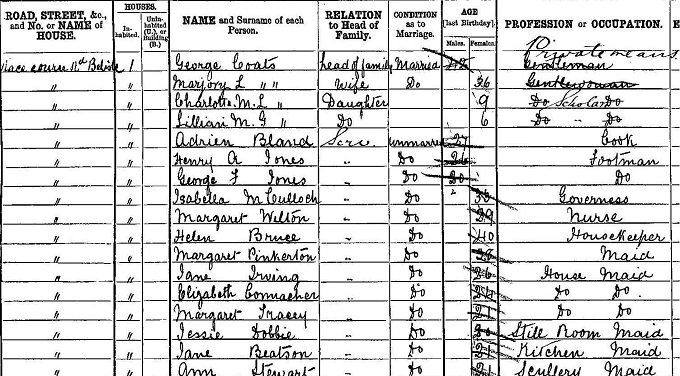 In 1901 George Coats, 52, thread manufacturer, was enumerated at Mansion House, Forest of Glentanar, with his wife, two daughters and son. The census return for the district of Aboyne in the county of Aberdeen records that the house had 59 rooms with one or more windows.

In 1905 J and P Coats Ltd were recorded as owners of substantial numbers of properties in the Paisley area. This valuation roll entry for Paisley burgh shows the thread, dye and spool works, warehouses and offices as well as the Clerks' Dining Hall, the bowling and tennis green and club-house. The proprietors were members of the Coats family including George Coats. 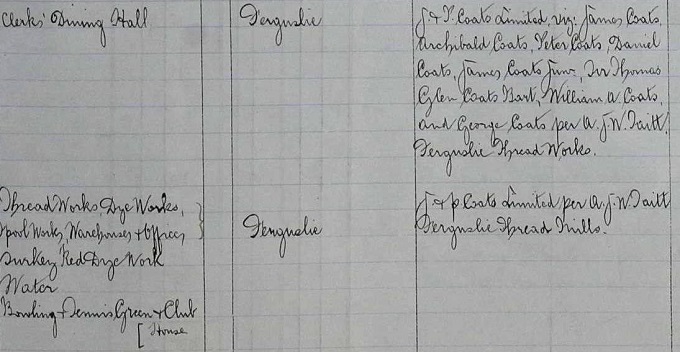 In 1915 George Coats is named of the proprietor of Estate of Glen Tanar in Aberdeenshire. The valuation roll for the parish of Aboyne lists over 60 houses, cottages, farms and lands as well as a quarry. It continues onto the next page and provides the names of tenants and occupiers of the various properties.

George Coats, 68, Thread Manufacturer (retired), died at 6 am on 26 November 1918. The entry in the statutory register of deaths for the district of Aboyne in the county of Aberdeen gives his place of death as Forest of Glen Tanar. The informant was his son, Thomas Coats, who was present at the death. The cause was pseudo angina. He had also suffered from emphysema for eight years.

The testament of the Right Honourable George, Baron Glentanar was registered at Aberdeen Sheriff Court on 2 April 1919. It included his will, an inventory and three corrective inventories (eiks). These records are indexed under the surname Glentanar rather than Coats. His gross estate was valued at £4,361,625, 8 shillings and 4 pence which would be worth in the region of £127 million today (based on The National Archives' currency converter).