John Murray was born at Cobourg, Ontario on 3 March 1841, the son of Robert Murray and Elizabeth Macfarlane. When he was seventeen he moved to Scotland, staying with his grandfather, John Macfarlane, in Stirlingshire. He studied medicine at the University of Edinburgh, worked as a ship's surgeon and carried out laboratory research on an electrical deep-sea thermometer. In 1872 he joined Charles Wyville Thomson as a naturalist on the Challenger Expedition to explore the world's oceans. On his return he was put in charge of the collections which were made available to researchers. He spent 15 years editing 'The Scientific Results of the Voyage of HMS Challenger' which was published in 50 volumes. He was also involved in explorations of Scotland's west coast, its freshwater lochs and the Faroe Channel Ridge. In 1909 he urged the International Council for Exploration of the Sea to back an oceanographic expedition to the North Atlantic. He was co-author of the resulting publication, 'The Depths of the Ocean', with Dr Johan Hjort, the expedition leader, in 1912.

In 1871, John Murray, 30, student of science, was enumerated at 17 Cornwall Street in Edinburgh. The census return for the district of St George shows that he was unmarried (unm) and a lodger in the household of David Rutherfourd. His place of birth is recorded as Ontario, Canada.

The 1885-86 valuation roll for the burgh of Edinburgh records the tenant of 32 Queen Street as The Challenger Expedition Commission and John Murray. There are two properties at that address and both are described as houses. The proprietor was Mitchell and Baxter WS, 11 South Charlotte Street, Edinburgh.

John Murray named his son, John Challenger Murray, after the famous expedition of 1872. The entry in the statutory register of births for the district of St George's in Edinburgh gives the place of birth as 32 Palmerston Place, Edinburgh. John Murray's occupation is recorded as Editor of Government Reports. It also shows that he had married Isabel Henderson on 24 January 1889 in London.

Sir John Murray, scientist, died on 16 March 1914, aged 73 years. The entry in the statutory register of deaths for the parish of Kirkliston in the county of Linlithgow (West Lothian) gives his usual residence as Challenger Lodge, Wardie, Edinburgh. He died on a public road near Kirkliston. The informant was his son, John C Murray. In the left margin of the register entry there's a cross-reference to volume II of the Register of Corrected Entries (RCE), 5 May 1914.

The RCE confirms that a report about the accident had been sent to the Procurator Fiscal. The cause of death is confirmed as 'fracture of the base of the skull'. The time of death was 4:15 pm which is slightly earlier than the 4:30 pm recorded when his death was registered on 18 March. It is also more specific about the place of death as 'about a quarter of a mile eastwards of Kirkliston'. The entry has been certified by the Procurator Fiscal's Office, Linlithgow and the Registrar at Kirkliston. 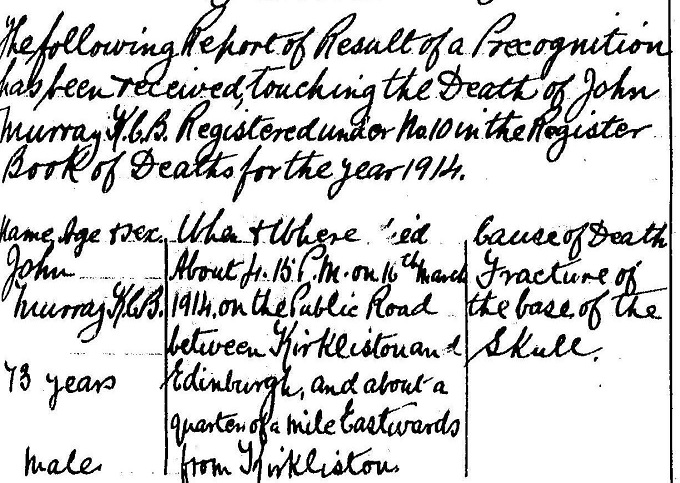 The testament of Sir John Murray was registered at Edinburgh Sheriff Court on 24 March 1914. The short inventory lists amounts in bank accounts, shares and the value of furniture and other effects in Challenger Lodge and Villa Medusa, his properties in Edinburgh. He had nominated Laurence Pullar and family members to be his executors. As his children were still minors - their dates of birth are recorded - their right to act was suspended.

In his will he makes provision for his family and servants. He expresses his wish that his deepsea collections of maritime deposits and his scientific library be kept together. He directs his wife to set apart the Villa Medusa and related buildings 'so as to continue to form what is known as the "Challenger Office" where scientific work may be carried on by paid workers or by voluntary workers'. He also makes bequests to the Royal Society of Canada for ocean research, to former colleagues and those still working in the Challenger Office at the time of his death. 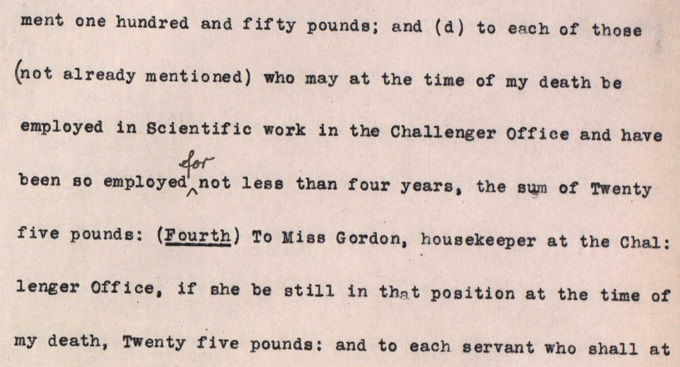 On 8 June 1914 an additional or corrective inventory, known as an eik, was presented. It provides a long list of shares along with debentures and sums due. The corrected amount for Sir John Murray's moveable estate was £143,606, 18 shillings and 9 pence which would be worth in the region of £8.5 million today (based on The National Archives' currency converter). (National Records of Scotland, SC70/1/553 pages 189-211)

You can find further information in the research guide to wills and testaments and examples of eiks in our Scottish Handwriting website.