Stanley Cursiter studied at Edinburgh School of Art and set up as a designer in 1909. During the First World War he fought at the Battle of the Somme before transfer to a survey battalion. His work on the transfer of information about enemy positions from aerial photographs was recognised with a military award. He was appointed keeper at the Scottish National Portrait Gallery in 1925, elected a member of the Royal Scottish Academy in 1937 and was King's (later Queen's) Painter and Limner for Scotland from 1948. He was influential in the campaign to create a Scottish gallery of modern art and designed Saint Rognvald Chapel in Kirkwall. His paintings and portraits include one of Her Majesty Queen Elizabeth II receiving the Honours of Scotland in St Giles Cathedral, June 1953.

Stanley Cursiter was born on 29 April 1887, the son of John Scott Cursiter, baker and spirit merchant and Mary Joan Thomson. The entry in the statutory register for the district of Kirkwall in Orkney gives the place of birth as East Road.

In 1891 Stanley Cursiter, aged 3, was enumerated with his family at 15 East Road in Kirkwall. The census record for the district of Kirkwall shows that his father was born in Edinburgh.

In 1901 Stanley Cursiter, 13, was enumerated at Alton Villa with his mother, now widowed and head of household and sister, Margaret. The census record for Kirkwall and St Ola shows his mother, Margaret Johan Cursiter, was born at Sanday.

Stanley Cursiter, artist, married Phyllis Eda Hourston on 14 October 1916. The entry in the statutory register of marriages for Ayr also records that he was a 2nd lieutenant, 5th (Reserve) Scottish rifles and that his usual residence was 28 Queen Street in Edinburgh.

There is a related entry on page 192, volume 14 of the Record of Corrected Entries (RCE) for the registration district of Ayr in 1932. This authorises the correction of the occupations of both fathers and the addition of middle names for the mothers. 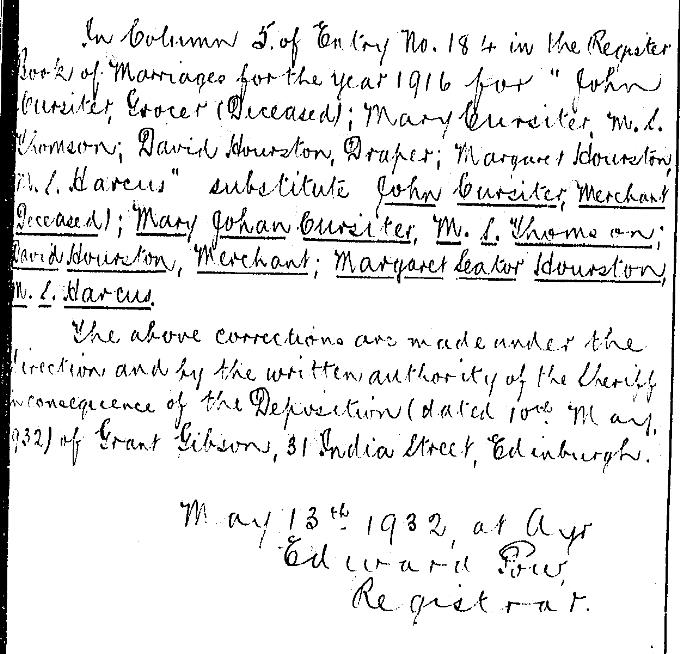