Randall Davidson was educated at Harrow School and studied law and history at Trinity College, Oxford before his ordination in the Church of England in 1874. Initially he was based in the diocese of Canterbury where he married Edith Murdoch Tait on 12 November 1878. She was the daughter of Archibald Campbell Tait, the first Scot to be Archbishop of Canterbury and a childhood friend of his father's. From 1883 he was dean of Windsor and domestic chaplain to Queen Victoria, from 1891 Bishop of Rochester then of Winchester until his appointment as Archbishop of Canterbury in 1903. He resigned in 1928 and was succeeded by another Scot, Cosmo Gordon Lang. He died at his home in Chelsea on 25 May 1930.

Randall Thomas Davidson was born on 7 April 1848, the son of Henry Davidson, merchant, and Henrietta Swinton. The entry in the Old Parish Register for St Cuthberts gives the date of baptism as 18 May and the family's address as 15 Inverleith Place in Edinburgh.

In 1851 Randall T Davidson, aged 2 years, was enumerated with his family at the same address. The household included five servants and one of the visitors, Reverend George Murray, was an Episcopalian clergyman and resident curate of St Margaret's Ipswich.

In 1871 Randall T Davidson, 22, student of arts, was staying with his aunt, Georgina Swinton, in the parish of Edrom, Berwickshire. The house had 42 rooms with one or more windows and the large household included 14 servants. 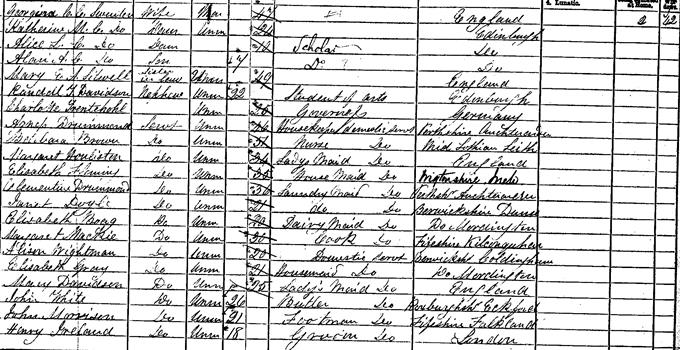