Thomas Bouch was born on 25 February 1822 in Cumbria. He joined the Edinburgh, Perth and Dundee Railway in 1849 before setting up as a consultant engineer working on railways, bridges, viaducts and tramways. We hold many bound plans and sections of his railway lines in Scotland in the Register House Plans (RHP) series as well as correspondence and family papers in a gift and deposit collection (NRS, GD266/132-267). His design for a rail bridge spanning the River Tay was accepted and it opened in 1878. Queen Victoria travelled across it the following year and construction of his proposed suspension bridge across the Forth got underway. He was knighted in June 1879. On 28 December 1879 a storm caused the Tay Bridge to collapse. A train was crossing at the time and many people died. The subsequent enquiry identified inadequate bracing of ironwork on the piers as one of the causes. Work on the Forth Bridge was suspended and Thomas Bouch retired to Moffat where he died shortly after a report had condemned him.

There are memorials to the 59 known victims of the Tay Bridge Disaster on both sides of the river.

Thomas Bouch, Civil Engineer, and Margaret Ferrie Nelson were three times proclaimed in the Parish Church of St Andrew. The entry in the Old Parish Register for Edinburgh (his parish) is dated 24 July 1853. He was residing at No 1 Hanover Street, Saint Andrew Parish, Edinburgh and Margaret at No 198 Buchanan Street, Glasgow. She was the daughter of Thomas Nelson Esquire, Glasgow.

A second entry in the Old Parish Register for Glasgow records that Thomas Bouch and Margaret Ferrie Nielson, were married on 28 July by Dr James Craik, one of the ministers of Glasgow. The spelling of Margaret's surname differs here - it is Nelson in other records.

In 1861 Thomas Bouch, 39, Civil Engineer, was enumerated at 6 Oxford Terrace with his family and three servants. The census return for the district of St George's in Edinburgh gives his place of birth as Cumberland.

In 1871 Thomas Bouch, 49, Civil Engineer, was enumerated at the same address. The household return for the district of St George's in Edinburgh gives his birth place as England.

Thomas Bouch, Knight, Civil Engineer, died at 1:40 am on 30 October 1880, aged 58 years. The entry in the statutory register of deaths for the parish of Moffat in the county of Dumfries gives the place of death as Ellenbank, Moffat and his domicil as 6 Oxford Terrace, Edinburgh. The cause of death column shows that he had been ill for several months. The informant was his son, William Bouch, who was present at the death.

The testament of Sir Thomas Bouch was registered at Edinburgh Sheriff Court on 1 March 1881. It consists of a will and inventory. He bequeaths his property, moveables, carriages, horses, harnesses, saddlery, wines, spirits and liquors, etc to his wife. His only son William receives £15,000 and all the professional and scientific books. His two daughters, Fanny and Elizabeth Ann, receive £10,000 each. His assistants, George Trimble and Thomas Peddie, along with his clerk, Richard Dickson Roddick, get £500. There is fine print of how the income and estate are to pass down to any grand-children and references to the will of William Bouch, his brother who died in 1876. Sir Thomas inherited stocks and shares from him, which are listed in the inventory. He names his trustees and executors as Miss Ann Bouch residing at Thursby near Carlisle (his birthplace), John Walker, General Manager of the North British Railway Company, Edinburgh, Andrew John Dickson, solicitor in the Supreme Courts in Edinburgh and William Bouch, his son (as long as he is 21 years old at the time of his father's death). 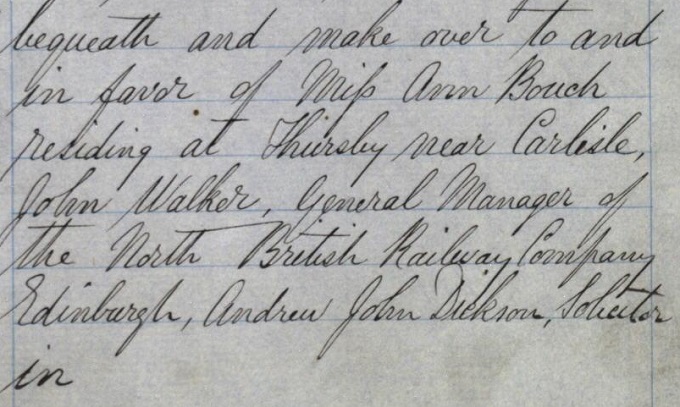 The inventory also lists debts owed to Sir Thomas Bouch at the time of his death. The first is by William Arrol, Dalmarnock Iron Works, Glasgow. 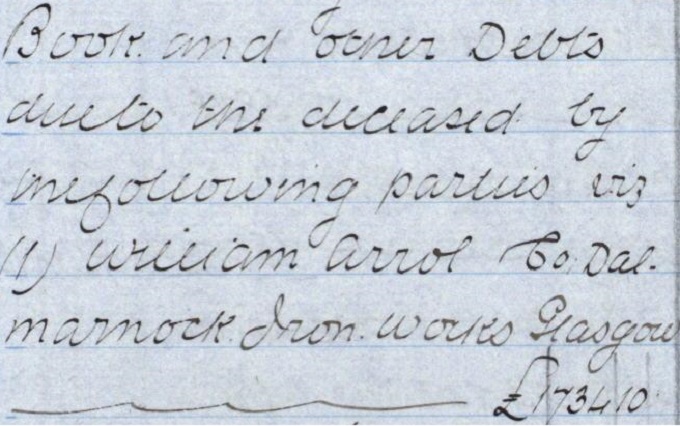 There is also a disputed amount owed by the Forth Bridge Railway Company. 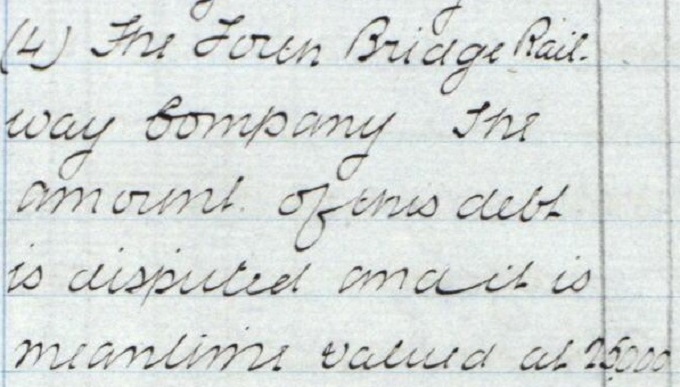