James Ballantyne studied law at the University of Edinburgh and started to practise in Kelso. He was invited to edit the 'Kelso Mail' which was first issued in 1797. He knew Walter Scott from school and university and published his 'Minstrelsy of the Scottish Border' (1802). He set up printing premises in Edinburgh where the quality of his output was admired - Scott insisted that his publications were to be printed there. His younger brother, John Ballantyne, joined the firm and they set up a publishing business but it wasn't successful. James Ballantyne also became editor of the 'Edinburgh Weekly Journal'. In 1826 a financial crisis resulted in the bankruptcy of Scott's publishers - Archibald Constable in partnership with Robert Cadell - and the collapse of the printing business. It was rescued by a trust but James Ballantyne's debts were discharged by Scott's creditors. On his deathbed he wrote a memorandum of his long association with the famous writer, a generous friend and business partner.

James Ballantyne was born on 15 January 1772, the son of Mr John Ballantyne and Mrs Jean Barclay, his spouse. The entry in the Old Parish Register (OPR) for Kelso gives the date of baptism as 21 January 1772 and the witnesses as Messrs Thomas Scott and John Waldie. 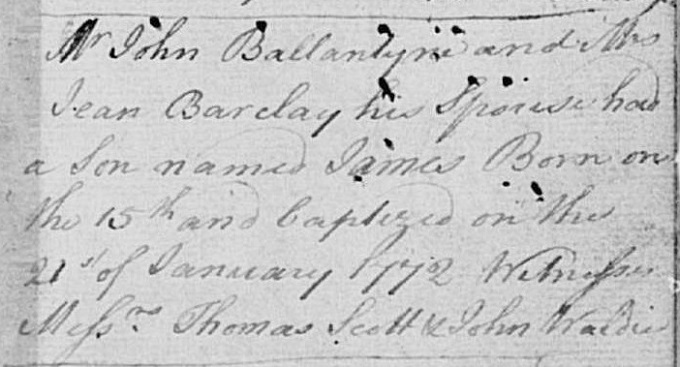 Mr James Ballantyne in the parish of Canongate, Edinburgh and Miss Christian Hogarth in this parish, were proclaimed in order for marriage on the 21st and 28th January 1816 and married. The entry is in the Old Parish Register for Channelkirk (her parish). Christian was the aunt of Catherine Dickens.

There is a second entry (his parish) dated 27 January 1816. Mr James Ballantyne, Printer, No 10 St John Street, Canongate, and Miss Christina Hogarth, parish of Channelkirk, eldest daughter of Robert Hogarth Esquire, Carfrae in said parish, gave up their names for marriage. The entry in the Old Parish Register for Canongate was certified by Duncan Cowan, Merchant in Canongate, and Robert Millar, Bookseller, High Street, Edinburgh.

James Ballantyne, Printer, Edinburgh died on 16 January 1833 at Number 1 Hill Street. The entry in the Old Parish Register for Canongate gives the date of his interment as 21 January on the East side of the yard, South side of the family ground and close to the front of Titler's tomb. It records his age as 61 years and the cause of death as blood vomiting. The type of burial is 'turf'.

A second entry in a later volume for the same OPR spells the surname Ballantine. It provides the same details for his occupation, age and date, place and cause of death.

The testament of James Ballantyne, Printer in Edinburgh, residing in Hill Street, was registered at Edinburgh Sheriff Court on 10 April 1833. The inventory lists the value of his interests in the 'Edinburgh Weekly Journal' newspaper; of furniture, plate, china, curios and books at his house in Hill Street; of types, printing presses, machines and steam engines at his printing offices; and of the book debts due to James Ballantyne and Company. 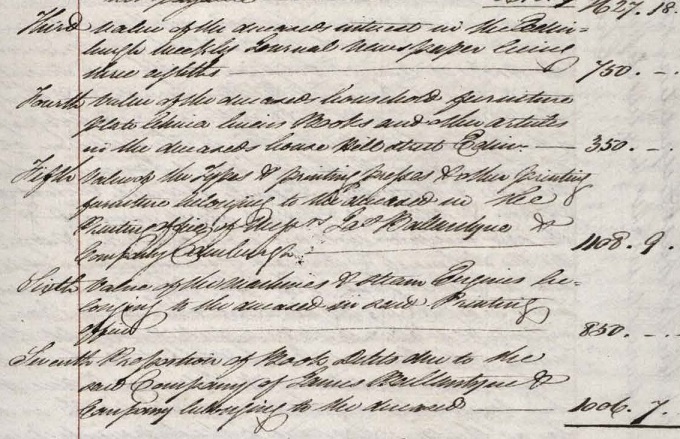