Flora Clift Stevenson set up classes for messenger girls, supported the Edinburgh Association for Improving the Condition of the Poor, the United Industrial Schools of Edinburgh and the Edinburgh Ladies Educational Association. She was one of the first members elected to the new school boards set up in 1873. Among her concerns were ensuring regular attendance, that girls should have the same quality of schooling as boys and that there should be equal pay for women teachers. She was an adviser to the government on juvenile offenders and was active in the women's suffrage movement. She was given the freedom of the City of Edinburgh in 1905 in recognition of her contribution to education. Her name lives on in Edinburgh's Flora Stevenson Primary School.

Flora Clift Stevenson was born on 30 October 1839, the lawful daughter of James Stevenson, merchant, West George Street and Jane Stewart Shannan. The entry in the Old Parish Register (OPR) of baptisms for Barony records that she was their 11th child. The witnesses were Nathaniel Stevenson and John Dalglish.

In 1841, Flora Stevenson, aged 1, was enumerated at West George Street with her parents. The census return for the parish of Barony in the county of Lanark records her father's occupation as cotton broker. The household included her four brothers and five sisters. (National Records of Scotland, 1841/622/49, page 9)

In 1851, Flora C Stevenson, aged 11, was enumerated at 16 Atholl Crescent in Edinburgh. The census return for the parish of St Cuthbert's gives the head of household as June Anderson, Boarding School, and includes Flora's sisters Mary and Louisa. The schedule continues onto the following page with details of the other boarders and servants.

In 1861, Flora Stevenson, aged 21, was enumerated at 13 Randolph Crescent in Edinburgh. The census return for the district of St George records her father, a widower, Justice of the Peace, Chemical Manufacturer and Copper Smelter, as head of the household. The other occupants were her sisters, brother, sister-in-law, nieces, nephew, five servants and two aunts.

In 1871, Flora C Stevenson, 31, was enumerated at the same address. The census return for the district of St George's gives her sister, Elizabeth, as head of the household (pro tem), that is, for the time being. Her brother, his wife and children, seven servants and one visitor are listed. As in 1861 there isn't an occupation recorded for Flora or her sisters. (National Records of Scotland, 1871/685-1/61/5)

The valuation roll for the parish of the City of Edinburgh records Misses Louisa and Flora Clift Stevenson LLD, liferentices, as proprietors and occupiers of the house at 13 Randolph Crescent.

Flora Clift Stevenson, 65, LLD Chairman of Edinburgh School Board, died at 10:45 am on 28 September 1905 at the Marine Hotel in St Andrews. The statutory register of deaths for the district of St Andrews and St Leonards in the county of Fife records that she was single and that her usual residence was 13 Randolph Crescent in Edinburgh. The informant was her nephew, Arnold Stevenson of 4 Porchester Gardens, London.

The testament of Flora Clift Stevenson, LLD, was registered at Edinburgh Sheriff Court on 26 October 1905. The inventory includes the valuation of her portrait in oils by Alexander Roche RSA which had been presented by public subscription. It was valued by Alex. Dowle at £52 and 10 shillings (over £4,100 in 2017 according to The National Archive's currency converter). 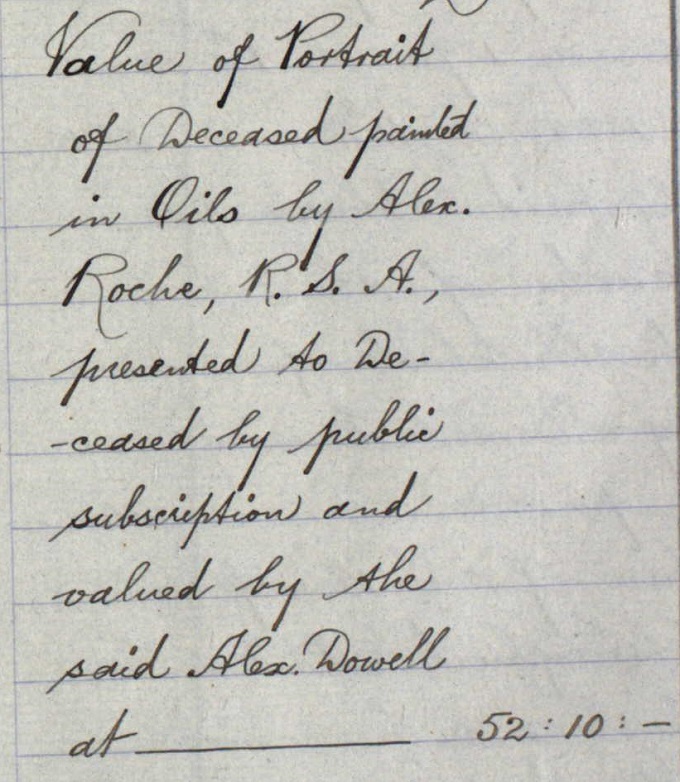 Flora Clift Stevenson left a will with priority given to her surviving sisters, nieces, nephews and a cousin, Ann Angus, residing in Portrush, Ireland. She made a special provision for her portrait to be given to the trustees of a public gallery in Scotland. The choice of institution was left to the discretion of her executor. It is now held by the National Galleries of Scotland and an image is available on the Art UK website. 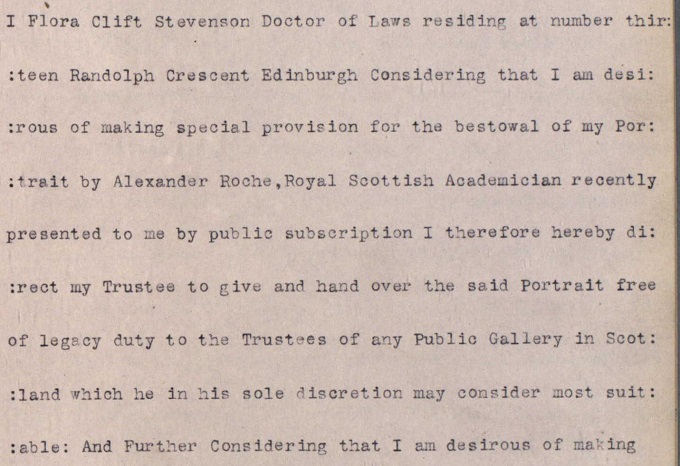