Hector MacDonald was born in 1853. He left school at the age of 12 to work in Dingwall. In 1870 he enlisted with the 92nd Gordon Highlanders and saw service in India and Afghanistan. His bravery and skill were rewarded with promotion to colour sergeant in 1874 and lieutenant by 1881. From 1885 he served in the Egyptian Army, then with Kitchener in the Sudan Campaign which ended in 1898. He returned to India from 1899 to 1900 where he was the brigadier-general in command of the Sirhind district of the Punjab. In 1901 he was knighted by King Edward VII. During the Boer War he commanded the Highland Brigade and in 1902 became commander of British forces in Ceylon (modern day Sri Lanka). His celebrated career ended on 25 March 1903 when he shot himself in his Paris hotel room after allegations of homosexuality in the newspapers. His body was returned to Scotland where a private funeral was held in Edinburgh. Thousands of mourners went to the Dean Cemetery to pay their respects. Memorials were later erected there and at Dingwall.

In 1861, Hector McDonald, 8, scholar, was enumerated at Allangrange Park with his parents and three older brothers. The census return for the parish of Urquhart gives his place of birth as Urquhart in Ross-shire. The household schedule is split over two pages.

Hector Archibald MacDonald, 31, Lieutenant (Gordon Highlanders), residing at Edinburgh Castle, married Christina McDonald Duncan on 16 June 1886. The entry in the statutory register of marriages for the district of St George in the County of Edinburgh gives the date of registration as 6 September 1894. This was an irregular marriage as shown in column six which gives details of an extract decree of declarator, dated 17 July 1794, in the Court of Session.

The left-hand margin includes this annotation by the Assistant Registrar: 'The parties having failed to appear to sign the registers, their names have been inserted by me, John Aitchison, Assist[ant] Registrar'. Their son, Hector Duncan MacDonald, was born in 1888 but his birth wasn't registered until 7 September 1894.

The testament for Sir Hector Archibald MacDonald KCB DSO ADC, Brigadier General, was registered at Edinburgh Sheriff Court on 1903. He left a personal estate worth £4,402, 11 shillings (s) and 6 pence (d) which would be worth in the region of £346,000 today (based on The National Archives currency converter). There are two index references, dated 4 July 1903, to a non-Scottish Court (SC70/7/17).

The inventory provides details of his date and place of death: 'Sir Hector Archibald MacDonald died at Paris France upon 25 March 1903 without any fixed or known domicile except that the same was in Scotland his domicile of origin. 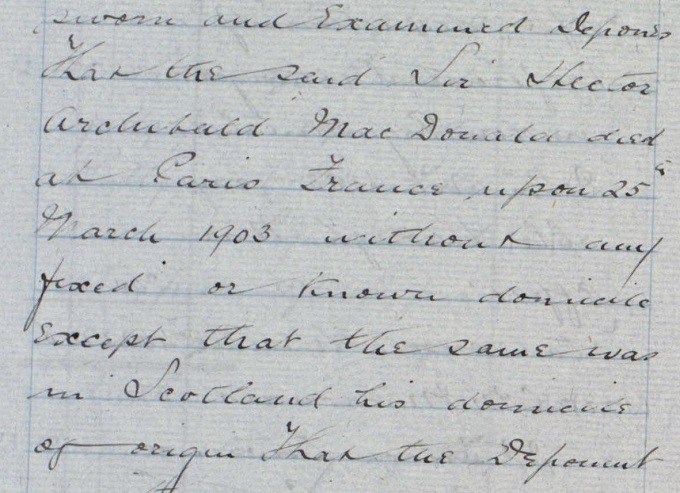 He signed his will, H A Macdonald, Brigadier General, at Umballa (Ambala in northern India) on 27 December 1799 before proceeding on active service to South Africa.

The will is interesting for the list of items that are to be kept as heirlooms for his son Hector. It includes a portrait of Queen Victoria; caskets containing  the Freedom of the Town of Dingwall and of addresses from the Highland Clans Glasgow and the Highland Association London; the sword of an Aide-de-Camp to the Queen presented by the people of Ross and Cromarty; swords of honour presented by the Clan Association London and the MacDonald Society; addresses presented by the towns of Inverness, Tain and Invergordon and 'by the people of my birthplace'; the 'dirk and skene dhu given me by my old Comrades the Sergeants of the 92nd Gordon Highlanders'; medals and decorations; and the thanks on vellum of both Houses of Parliament.