John George Bartholomew started work at his father’s firm in Edinburgh where they introduced the first contour layer-coloured maps. He was following in the foot-steps of his great-grandfather, George Bartholomew, and his grandfather, John Bartholomew senior. He later set up his own office and printing works, the Edinburgh Geographical Institute, in Duncan Street. The firm produced gazetteers, atlases and maps for leisure, the scientific community and other publishers. These were of the highest standard and his contribution was recognised by election as fellow of the Royal Society of Edinburgh, award of the Victoria medal by the Royal Geographical Society of London and an honorary doctorate from the University of Edinburgh. In 1913 he was appointed Geographer and Cartographer to George V. He and his family travelled to Portugal because of his ill-health. He died, and was buried, there in 1920. Two years later one of his most famous works ‘The Times Survey Atlas of the World’ was published.

The Bartholomew Archive is held by the National Library of Scotland which provides a history of the Bartholomew family and firm on its website.

John George Bartholomew was born on 22 March 1860, the son of John Bartholomew, engraver master, and Annie McGregor. The entry in the statutory register of births for the district of Canongate in the burgh of Edinburgh gives his place of birth as 10 Comely Green Place.

By 1871 John G Bartholomew, 11, scholar, had moved with his family to 5 Queen’s Crescent. The census return for the district of Newington in Edinburgh shows the household included his three sisters, one brother and a general servant. They had a visitor, Henry Bartholomew, map engraver.

John George Bartholomew, geographer, married Jennie Macdonald on 23 April 1889. The entry in the statutory register of marriages for the district of St Andrew in the burgh of Edinburgh gives his age as 29 and address as 32 Regent Terrace. The marriage took place at his bride’s home, 17 Dublin Street, after banns according to the form of the Free Church. It also gives his father’s occupation as geographer and records that his mother was deceased.

In 1891 John G Bartholomew, 31, geographer and publisher, was enumerated at 12 Blacket Place in Edinburgh. The census return for the district of Newington shows the household included his wife, Jennie, his son John who was just one and two servants (National Records of Scotland, 1891/685-3/63, page 10).

In 1901 John George Bartholomew, 41, geographer and cartographer, was enumerated at Falcon Hall, Falcon Avenue in Edinburgh. The census return for the district of Morningside shows that the household included his children, John, Elizabeth, George and Louis plus four servants. It gives the birthplace of his wife, Jennie, as Tain in Sutherlandshire.

In 1911 John George Bartholomew, 51, cartographer was enumerated at 10 Blacket Avenue in Edinburgh. The census return for the district of Newington shows the household included his wife, Jennie, and children, Elizabeth, Louis St Clair and Maisie. There were five servants and the house had 17 rooms with one or more windows. The section ‘particulars as to marriage’ records that John and Jennie had been married for 22 years and that they had five children born alive all of whom were living (National Records of Scotland, 1911/685-3/23, page 15).

A group search for John Bartholomew and Son in the 1915 valuation roll for the burgh of Edinburgh finds three different properties. The company is listed as proprietor of a stable in South Gray Street and a house at 13 Middleby Street in addition to their works at the Edinburgh Geographical Institute in Duncan Street.

The testament of John George Bartholomew, geographer and cartographical publisher, LLD, was registered at Edinburgh Sheriff Court on 9 June 1920. The inventory gives his date and place of death as 14 April 1920 at Cintra in Portugal. His usual residence was “Cardon”, 4 Mortonhall Road, Edinburgh. 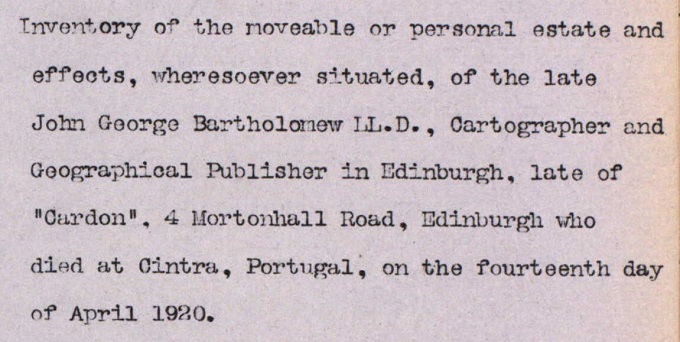 His trust disposition and settlement, signed on 17 April 1919, was witnessed by Christina McGillivray, his cook and Mary Hunter, his housemaid. There was a codicil of 10 November 1919. He appointed his wife, Jennie, his sons, John and Louis St Clair, and his cousin, Andrew Geddes Scott, a Writer to the Signet, as trustees and executors. He left money to his chauffeur and servants, £500 to the Royal Scottish Geographical Society and £500 to the University of Edinburgh for the founding of a chair of geography. This extract shows the items left to two of his children which include his medals and family portraits. 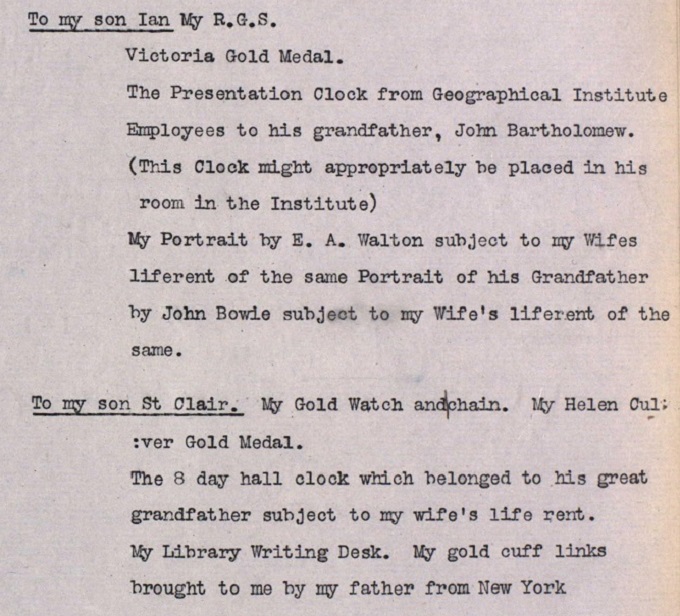