Alexander Mackenzie trained as a mason and worked on the Glasgow to Ayr Railway. He lodged with the Neil family in Irvine, emigrated to Canada with them in 1842 and married Helen Neil. He was elected to the provincial assembly as a reformer in 1861 and then to Canada's House of Commons following Confederation. He founded the Liberal Party and was elected its leader in 1873. He succeeded Sir John Alexander Macdonald as Prime Minister later that year and was in office until 1878. He stood down as leader but remained active in the parliamentary chamber. He died in Toronto on 17 April 1892.

Alexander McKenzie was born on 28 January 1822, the son of Alexander Mckenzie, wright and Mary Fleming. The entry in the Old Parish Register (OPR) for Logierait in the county of Perthshire gives the date of baptism as 8 February.

In 1841, Alexander McKenzie was enumerated at Grove Street in the parish of St George's in the Field, Glasgow. The census return gives his occupation as mason and age as 20 (ages were rounded down to the nearest five). The 1841 census doesn't include head of household or relationships within the household but it appears that he was lodging with James and Jean Wilson. 'N' for place of birth means that he was born in Scotland but not in the county of Lanarkshire. Without the parish of birth we can't be 100% certain that this is the correct entry but Alexander MacKenzie wasn't lodging with the Neils in Irivine at the time of the census. 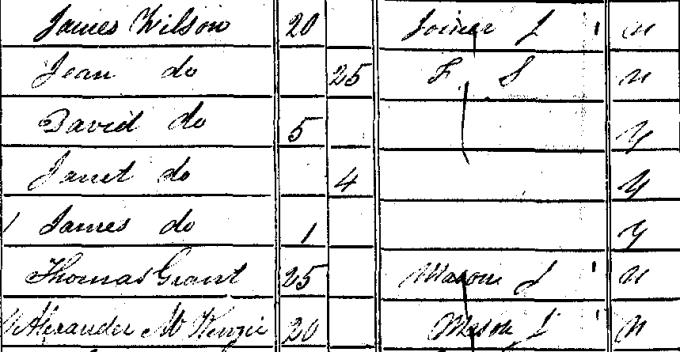