Flora Murray studied in Germany, at the London School of Medicine for Women and the universities of Durham and Cambridge. She submitted her thesis in 1905 based on work at the Crichton Royal Institution in Dumfries. She later held posts as house surgeon and assistant anaesthetist in London hospitals. She was an active suffragette who took part in the 1911 Census protest as well as treating those injured at demonstrations and after force-feeding in prison. In 1911 she co-founded the Women's Hospital for Children with Louisa Garrett Anderson. During the First World War they set up the Women's Hospital Corps which treated injured soldiers in France. Their professionalism was acknowledged when they were put in charge of Endell Street Military Hospital in London the following year. Flora Murray was awarded a CBE for her contribution. Her account of women as army surgeons was published in 1920. In 1921 she retired with Louisa to their cottage in Buckinghamshire. She died on 28 July 1923 and was buried in the local churchyard.

Flora Murray was born at 11:08 pm on 8 May 1869, the daughter of John Murray, landed proprietor and captain RN (Royal Navy) and Grace Harriet Graham. The entry in the statutory register for the district of Cummertrees in the county of Dumfries gives the place of birth as Murraythwaite. Her forename is missing from the entry. An annotation in the left margin dated 4 October 1869 refers to the 'Addition of child's name' and the Register of Corrected Entries (RCE), volume 1, page 10.

The RCE gives the instruction to 'prefix Flora to the child's surname' in the first column of the birth entry. This addition was made 'on the authority of a certificate in the form of Schedule (D) under the hand of the Rev Robert Hutton, Minister of St John's Episcopal Church, Annan, Dumfriesshire, 4 October 1869'. This was recorded at Cummertrees by John Johnston, Registrar. 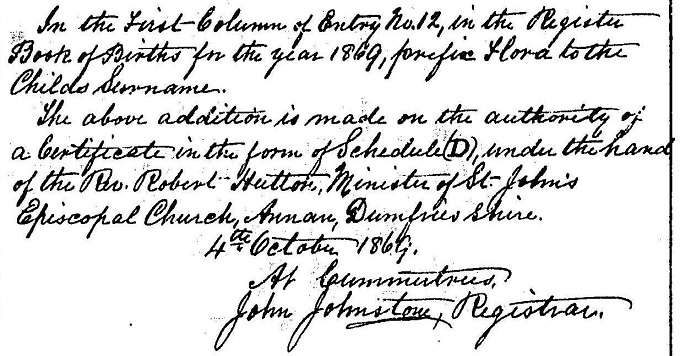 In 1871, Flora Murray, 1, was enumerated with her family at Murraythwaite House. The census return for the district of Cummertrees shows a very large household with ten servants.

In 1881, Flora Murray, 11, scholar, was enumerated with her mother and sisters at Murraythwaite House in the district of Cummertrees. Her mother  was recorded as head of household and a widow aged 45.