Old Tom Morris was a pioneer of professional golf. He started as an apprentice golf club maker in St Andrews and by playing in exhibition matches. He was appointed keeper at Prestwick where he continued his golf club and golf ball business. In 1860 he played in the first open championship and was the winner in 1861, 1862, 1864 and 1867. His son, Young Tom Morris, won the next four events. He returned to St Andrews as a greenkeeper and professional in 1865. There he helped to develop the game and received many visitors. He was playing into his 70s and worked up until his death in 1908. He was buried in the grounds of St Andrews Cathedral.

Find out more in our feature Old Tom Morris and Young Tom Morris.

Thomas Mitchel Morris was born on 16 June 1821, the son of John Morris, weaver and Jean Bruce. The entry in the Old Parish Register (OPR) for the parish of St Andrews and St Leonards in the county of Fife shows his baptism was on 24 June by Dr Buist with John and William Morris as witnesses.

In 1841, Thomas Morris, 20, was enumerated with his parents, sister and brother. The census return for the parish of St Andrews and St Leonards gives his occupation as golf ball maker apprentice.

Thos (Thomas) Morris, ball-maker, married Agnes Bayne on 21 August 1844. The entry in the Old Parish Register for St Andrews and St Leonards shows they were contracted to marriage on 5 June 1844 and that they were 'both of this parish, proclaimed and married'.

In 1861, Thomas Morris, 39, golf club maker, was enumerated with his wife and children at 40 High Street in the village of Prestwick in Ayrshire. The census return for the distict of Monkton and Prestwick is included in the entry for his son, Young Tom Morris.

In 1871, Thomas Morris, 49, golf club maker and employer of three men and one boy, was enumerated with his wife and children at 6 Pilmuir Links in St Andrews. The census return for the household is over two pages. The second page shows his son, Young Tom, as 'Champion Golfer of Scotland'.

In 1881 Thomas Morris, 59, golf club maker was enumerated at the same address with his son James, professional golfer. The census return gives his marital status as widower.

In 1891, Thomas Morris, 69, golf club and ball maker was enumerated at the same address with his daughter, Elizabeth Hunter, and grandchldren. The census return for the district of St Andrews and St Leonards shows that she was head of household and the 'X' that he was an employer.

In 1901, Tom Morris, 80, clubmaker, was enumerated at 7 The Links with his son James O F Morris. The census return for the district of St Andrews and St Leonards gives the same occupation for his son and shows that they were both employers.

Thomas Morris, 87, golf club maker and widower of Agnes Bain, died on 24 May 1908. The entry in the statutory register of deaths for the district of St Andrews and St Leonards shows that the place of death was the Cottage Hospital and that the informant was his grandson, William Bruce Hunter, who was living in Manchester. It also includes a reference in the left margin to the Register of Corrected Entries (RCE), volume 3, page 85.

The RCE reports the results of a precognition 'touching the death of Thomas Morris'. It is dated 1 June 1908 at the Procurator Fiscal's Office, Cupar. It was certified by Henry H Brown, Procurator Fiscal on 4 June and signed by John Stewart, Registrar. 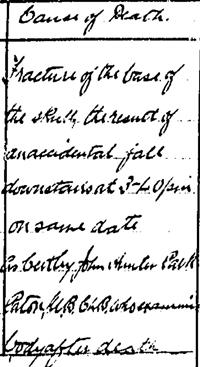 This detail from the RCE page (28 KB jpeg) shows further information about the cause of death:

'Fracture of the base of the skull, the result of accidental fall downstairs at 3:40 pm on same date'

As certified by Dr Paton 'who examined body after death'.

The will of Thomas Morris was registered at Cupar Sheriff Court on 6 June 1908. This detail shows that he left the whole of his estate to his son, James Ogilvie Fairlie Morris, and daughter, Elizabeth Hunter. 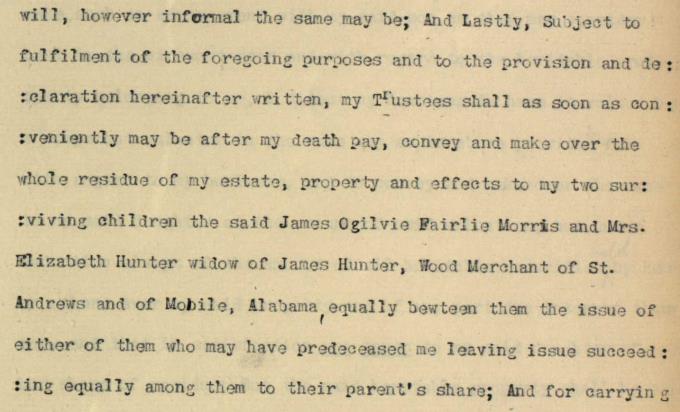 The inventory, registered on 3 October 1908, includes an entry for his 'retiring allowance' from the Green Committee of the Royal and Ancient Golf Club of St Andrews for the period from 15 May to the date of death.