John Brown was working at Balmoral when Queen Victoria and Prince Albert took on the estate. He was first mentioned in the Queen's journal in 1849 and from 1858 became her personal servant in Scotland. He transferred to Osborne House, taking along the Queen's favourite pony, during the period when she retreated from public view following the death of her husband. His devotion and service were rewarded with a medal and annuity. He died after a short illness at Windsor Castle on 27 March 1883 and was buried at Crathie. The relationship between John Brown and Queen Victoria, the subject of rumour during their life-time, has been portrayed in several films.

John Brown was born on 8 December 1826, the son of John Brown, farmer and Margaret Leys. The entry is in the Old Parish Register for Crathie and Braemar gives the family's address as Crathienaird.

In 1841 John Brown, 14, was enumerated with his family at Crathienaird in the parish of Crathie and Braemar. 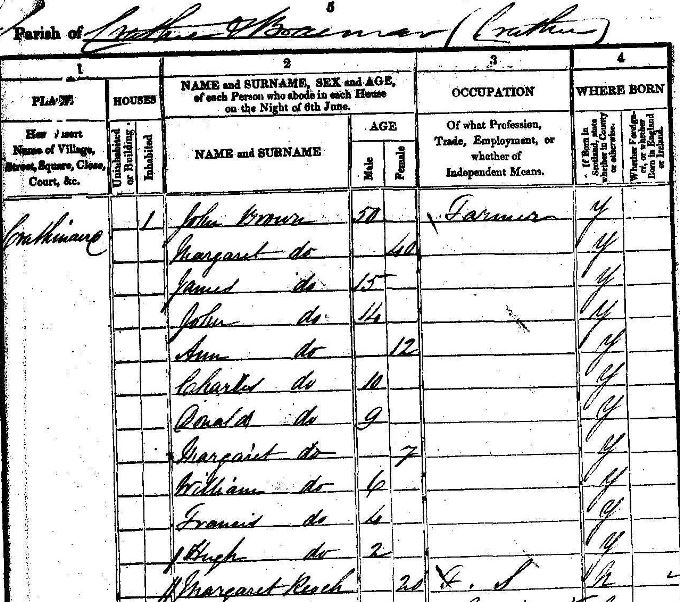 In 1851 John Brown, 24, and his family had moved to Bush in the same parish where his father is shown as a farmer of 20 acres plus 100 of hill pasture. No occupations are given for the adult son and daughters in the household.

In 1861 John Brown, 33, was enumerated at Balmoral Stables in the parish of Crathie and Braemar. His occupation is given as groom.