John Ruskin was born in London on 8 February 1819 into a family which had links with Edinburgh and Perthshire. He published major works on art and architecture, was influential in the Arts and Crafts movement and on the teaching of drawing from nature, gave lectures on the work of J M W Turner and the Pre-Raphaelites and was elected the first Slade professor of fine art at Oxford. He died at his home near Coniston on 18 January 1900. He is commemorated in the Ruskin School of Drawing, Ruskin College, Oxford (which was established for working-class students) and the Ruskin Library at Lancaster University. Brantwood, his house and garden in the Lake District, has been restored and opened to the public.

John Ruskin of Denmark Hill, London married Euphemia Chalmers Gray on 10 April 1848. The entry in the Old Parish Register (OPR) for the parish of Kinnoull in the county of Perthshire shows they were proclaimed and married by the Rev John Edward Touch, minister of Kinnoull. The annotation in the left margin records that the marriage was "disannulled and for which see page 102".

Annulment of marriage in 1854

Page 102 of the same register includes a summary of instructions for recording the annulment by an annotation to the original marriage entry. It states that 'the marriage ... was declared null and void by sentence of the Commissary Court of Surrey in the Diocese of Winchester in a suit promoted by the said Euphemia Ruskin' on 15 July 1854 and 'an Extract of this having been produced and read to the Kirk Session was engrossed in their minute of date 30 July 1854 at page 223'. The entries were to be signed by 'the moderator along with the clerk'. 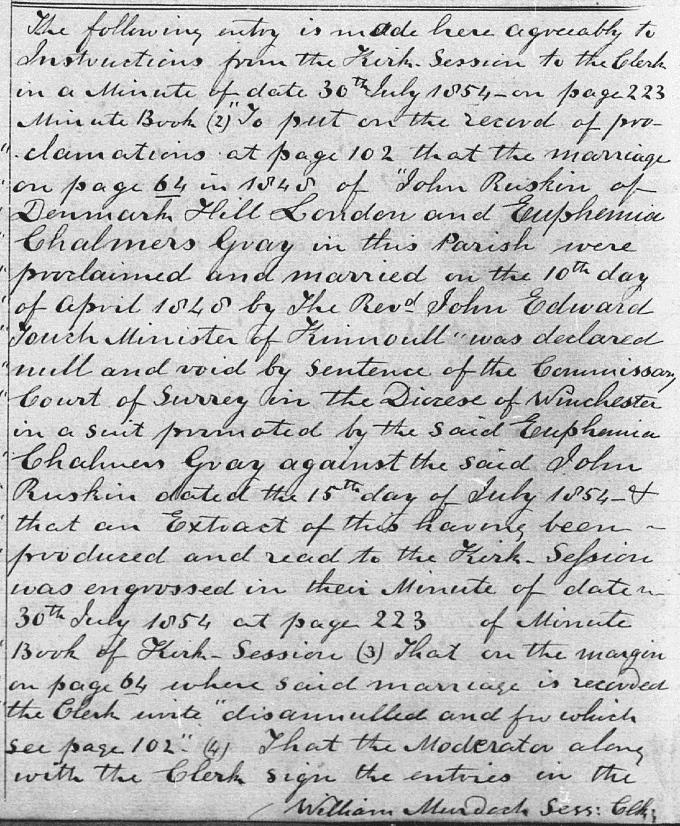