Dudley D Watkins was born in Manchester. He attended night classes at Nottingham School of Art whilst working for Boots and went on to study at Glasgow School of Art. He was appointed staff artist by the publisher D C Thomson and moved to Dundee in 1925. In 1936 he created Oor Wullie and The Broons for the 'Sunday Post' newspaper. Their success led to the launch of the weekly comics, 'The Dandy' and 'The Beano', for which he drew Desperate Dan and Lord Snooty. After the Second World War he drew Mickey the Monkey for 'The Topper' (launched 1953) and Ginger for 'The Beezer' (1956). He also produced adventure serials in comic form for 'The People's Journal'. From 1946 he signed his work ‘Dudley D Watkins’ or ‘D D W’ and became one of the best-known British comic artists.

Dudley D Watkins, 20, Artist, married Doris Edward Taylor, on 10 July 1937. The entry in the statutory register of marriages for the district of St Clement gives the place of marriage as the Methodist Church, Ward Road, Dundee 'after banns according to the forms of the Methodist Church'. It also gives his parents details as James William Watkins, Artist, and Eva Dexter. Dorothy Watkins, who resided in Nottingham, was one of the witnesses.

In 1940 Dudley D Watkins was recorded at 353 Kingsway. The valuation roll for the burgh of Dundee describes him as the tenant and occupier of a dwellinghouse and garage valued at £60 a year. The proprietor was the Dundee Garden City Association Limited (per Shiel and Small, 5 Bank Street).

Dudley Dexter Watkins, 62, cartoonist and illustrator, died at 12:00 noon on 20 August 1969. The entry in the statutory register of deaths for the district of Broughty Ferry in the county of Angus gives the place of death as Winsterley, 23 Reres Road, Broughty Ferry. The informant was his son, Roger D Watkins. Dudley D Watkins' date of birth is recorded as 27 February 1907. 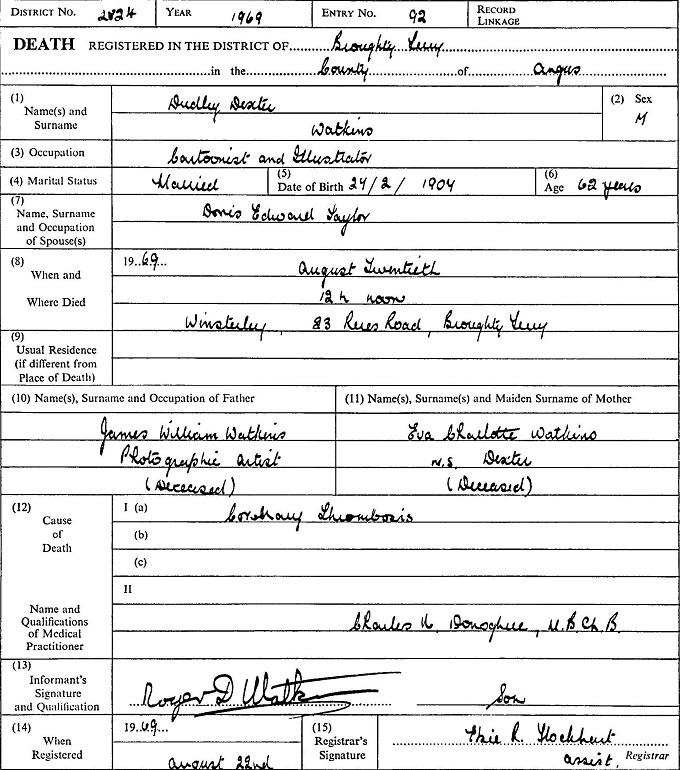