Alexander Frederick Douglas-Home was born in London on 2 July 1903, the son of Charles Douglas-Home, 13th earl of Home and Lilian Lambton. After Oxford and a cricket tour with the MCC he became involved in the family's estates at the Hirsel in Berwickshire and Douglas in Lanarkshire. He was elected as a National Unionist MP in 1931 and acted as personal private secretary to Neville Chamberlain. He lost his seat in 1945 but regained it as a Conservative MP in 1950 and then had to give it up on becoming 14th earl of Home in 1951. He was appointed minister of state at the Scottish Office, then Commonwealth Secretary and Foreign Secretary. Following Harold MacMillan's resignation he took over as Prime Minister from 1963 while MP for Perth and Kinross. He was now Sir Alec Douglas-Home having been made a Knight of the Thistle in 1962. After losing the election in 1964 he stood down as party leader and later took up a seat in the House of Lords as Baron Home of the Hirsel.

In 1911 Alexander Frederick Douglas-Home, 7, scholar at home, was enumerated with his parents, Lord and Lady Dunglass, at Springfield House. The census record shows that the building, on the Brigham and Kelso Road in the parish of Eccles in Berwickshire, had 21 rooms with one or more windows. The large household included two visitors and eleven servants - two are listed on the following page. 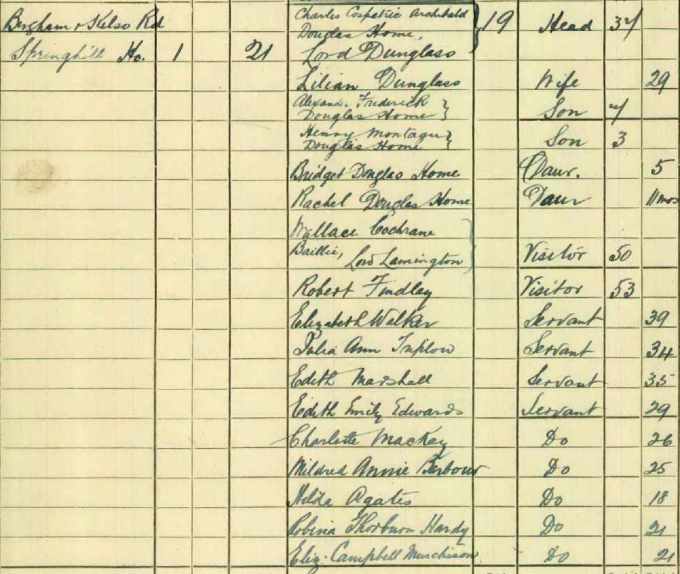 Alexander Frederick, the Right Honourable the Lord Home of the Hirsel KT PC died on 9 October 1995 at The Hirsel. The entry in the statutory register of deaths for the district of Coldstream records that he was 92 years old, and widowed (his spouse's name was Elizabeth Hester Alington). It gives his occupation as politician. (National Records of Scotland, 1995/781/44)