Businessman and politician in Canada

Donald Smith emigrated from Scotland to Canada in 1838 and worked for the Hudson’s Bay Company. He was promoted to various positions and was eventually made its governor in 1889. He was also involved in negotiations that led to the founding of Manitoba, played an important role in the construction of the Canadian Pacific Railway, invested in companies on both sides of the Atlantic and made generous donations to hospitals and educational institutions including the University of Aberdeen. He was appointed High Commissioner to London in 1896 and created Baron Strathcona and Mount Royal of Glencoe and Colonsay the following year. He died in London on 21 January 1914 and was buried at Highgate Cemetery.

An inventory of Lord Strathcona's personal estate was presented at Edinburgh Sheriff Court on 6 May 1914. The introductory clause of the inventory records that the late Right Honourable Donald Alexander Lord Strachcona and Mount Royal of Glencoe in the County of Argyll and of Mount Royal in the Province of Quebec, GCMG, GCVO, late of Glencoe and Colonsay, and of Debden Hall, Essex, died at 28 Grosvenor Square in London on 21 January 1914. The post-nominals GCMG are used by Knights Grand Cross of the Order of St Michael and St George, and GCVO by Knights Grand Cross of the Royal Victorian Order. 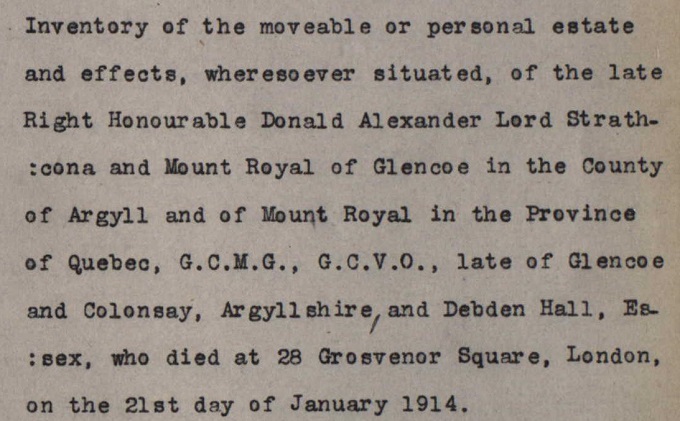 An additional inventory was presented at Edinburgh on 26 August 1916. It records the value of Lord Strathcona's gross personal and moveable estate as £4,656,268, 8 shillings (s) and 1 pence (d), making him one of the wealthiest Scots of his time. It would be worth in the region of £275 million today (based on The National Archives currency converter.